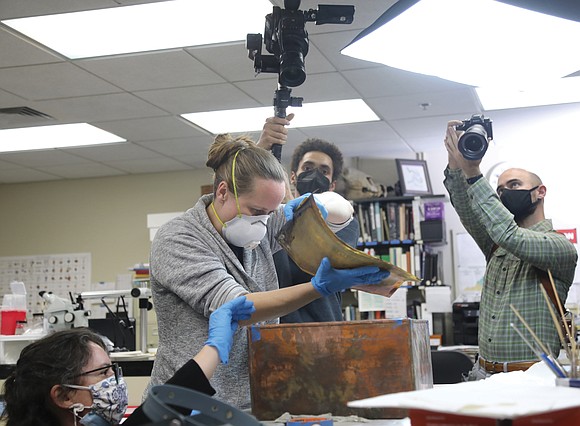 Conservator Gretchen Guidess with the Colonial Williamsburg Foundation, left, assists conservator Sue Donovan of the university of Virginia, in removing items from the copper time capsule found by workers on Monday in the rubble of the Lee statue pedestal on Monument Avenue. The box was opened and unpacked by conservators on Tuesday in the conservation lab at the state Department of Historic Resources. Photo by Regina H. Boone

Conservation experts at the Virginia Department of Historic Resources pulled books, money, ammunition, documents and other artifacts Tuesday from a long-sought-after time capsule found in the remnants of a pedestal on Richmond’s Monument Avenue that once held a statue of Confederate Gen. Robert E. Lee.

During the course of about two hours, the team sliced open the 36-pound copper box and meticulously pried apart and documented the damp contents inside. The box had been tucked in a foundation cornerstone of the massive—and now mostly deconstructed—Richmond monument since 1887.

Opening the box and removing its contents were a welcomed event for those involved.

“More than anything, my personal reaction is more about watching the public embrace history and be so interested in it,” said Julie Langan, a state historic preservation officer and DHR director. “That’s what’s really moving to me.”

The time capsule had drawn substantial interest locally and nationally, both because it proved to be elusive during an earlier search and because historical records had led to some speculation it might contain a rare photo of President Abraham Lincoln after his death. Ultimately, such a photo was not found.

Instead, the box contained a range of Confederate memorabilia and assorted items, including a bullet embedded in a block of wood, a commemorative ribbon of Gen. Lee and a printed image from an 1865 issue of Harper’s Weekly of a wood engraving showing a figure grieving over President Lincoln’s grave.

The conservation team was able to identify many of the items immediately as they were pulled from the box, though some materials were warped from water damage and required further study. Experts were on hand to triage the artifacts.

“They were more waterlogged than we had hoped, but not as bad as it could have been,” said Kate Ridgway, DHR’s lead conservator.

Ms. Ridgway said there was some question about whether calling the vessel a time capsule was the most accurate terminology, as it did not appear to have a definitive date when it was expected to have been opened.

“A cornerstone box is probably more accurate,” she said.

The box was found Monday, buried and sitting in water, by workers with Team Henry Enterprises who were wrapping up the removal of the Lee statue pedestal.

Gov. Ralph S. Northam ordered the enormous equestrian statue of Lee removed in 2020, amid the global protest movement sparked by the police killing of George Floyd in Minneapolis. Litigation pushed back the plans, and the statue was not removed until September, after a court cleared the way.

Other Confederate statues along Monument Avenue, which were owned by the city, were removed in mid-2020.

Earlier in December, Gov. Northam ordered the Lee monument pedestal removed as well, and crews working on the project again started to search for the time capsule. News accounts from the late 1800s detailed the placement of the box in the cornerstone of the pedestal, but a lengthy search during the statue removal came up empty.

A different time capsule, made of lead, was discovered two weeks ago, generating excitement. But hours of painstaking and ultimately anti-climactic examination suggested that artifact was placed by someone else, perhaps someone involved with the monument’s construction.

The box opened on Tuesday was finally found after a discussion between Team Henry and historians at The Valentine who provided the crew with material that helped them locate the box, which was deeper in the ground and further into the pedestal than previously had been believed.

“I’m just amazed at how intact things are,” said Devon Henry, owner and chief executive officer of Team Henry Enter-prises. “Over 130 years being submerged and underground, and still being somewhat intact and legible is pretty, pretty cool.”

The measurements and copper material of the box opened Tuesday matched historical accounts, with the contents inside largely lining up with the items listed in a newspaper article when the statue was erected in 1890.

Along with several waterlogged books, pamphlets and newspapers, the box contained an envelope of Confederate money, which conservators carefully separated, and two carved artifacts — a Masonic symbol and a Confederate flag said to have been made from the tree that grew over Gen. Stonewall Jackson’s original grave.

Conservators also pulled buttons, coins and Minié balls, a type of bullet used in the Civil War, from the box. A bomb squad had checked the capsule Monday, partly to make sure there was no live ammunition inside.

Kate Ridgway, lead conservator with the state Department of Historic Resources, holds up a Minié ball, a type of bullet used during the Civil War. Ammunition, Confederate money and other artifacts were found in the copper time capsule placed in the Lee statue pedestal in 1887.

While Ms. Langan felt it was too soon to say if the box was meant to be Confederate propaganda, others had a different perspective on its meaning.

“The original copper box to me is a window into the mindset of the Confederacy,” said Dale Brumfield, a local historian, author and journalist.

He pointed to the placement of the capsule decades after President Lincoln’s assassination in 1865 as evidence of lingering animosity against him and Northern states, along with “wounds still raw” years after the end of the Civil War.

“I am hoping that by studying the materials in the capsule, we can get a clearer perspective on why those feelings lingered for so long,” Mr. Brumfield said.