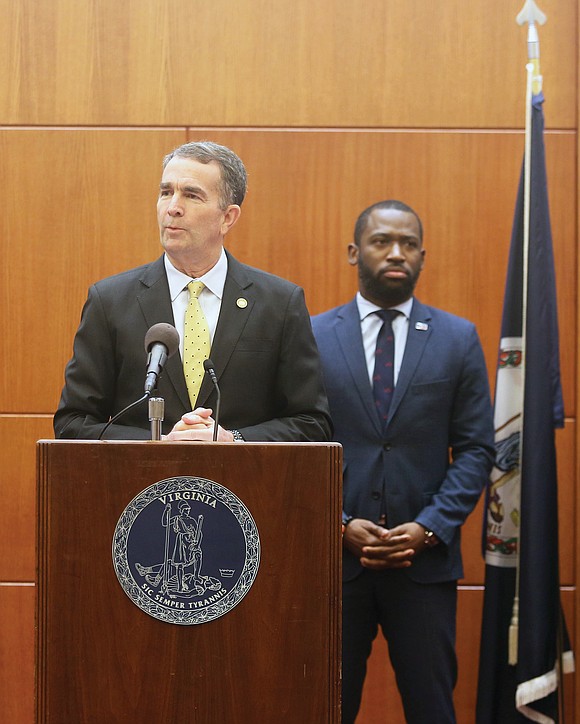 Gov. Ralph S. Northam offers the latest information on the coronavirus and its impact in the state during a news conference Wednesday at the Patrick Henry Building. At the briefing, the governor’s second in a week, he was surrounded by a bevy of state health, hospital and other officials, including Mayor Levar M. Stoney. Photo by Regina H. Boone

With the coronavirus sweeping the globe, efforts to mitigate its surge and impact are being felt across the state.

From elected officials to private company executives, small business operators, schools and universities, hospitals and clinics and individuals, people are bracing for what the World Health Organization officially declared a pandemic on Wednesday.

Richmond Public Schools, which serves more than 24,000 students from pre-K through 12th grade, announced that all school and division-sponsored field trips, athletic events and conferences have been canceled, beginning Wednesday.

“We will lift this ban once we feel confident that the potential threat to students and staff has abated,” stated RPS Superintendent Jason Kamras in his message.

He also asked families to “prepare now for the possibility of canceling school” if any students or staff members are confirmed with coronavirus, also known as COVID-19.

University of Virginia officials also announced Wednesday that on-campus classes have been suspended “for the foreseeable future,” with students who are now on spring break to resume classes online beginning March 19.

Officials said the university will reassess the situation on April 5, allowing any students returning from spring break to have passed the two-week incubation period for coronavirus.

Organizations everywhere are examining whether to continue with planned conferences, concerts and other events. The day-long symposium marking the 30th anniversary of former Gov. L. Douglas Wilder’s inauguration, which was planned for March 26 at Virginia Union University, also has been postponed.

“Together we can get through this and we will,” Gov. Ralph S. Northam, a physician, said at a news conference Wednesday, where he was surrounded by state health experts.

He also announced Virginia’s ninth confirmed case of coronavirus; there have been no fatalities.

Most of the cases, officials said, involve people who have recently returned from international travel. The cases have been reported in Northern Virginia, Spotsylvania and Virginia Beach, with the latest reported Wednesday in Ashland, just north of Richmond.

Nationally, officials on Wednesday reported more than 1,050 confirmed cases of coronavirus, with 35 deaths. The rapid spread of the virus across the globe has resulted in more than 121,500 reported cases and 4,373 deaths.

Gov. Northam said the state has received 300 to 400 medical kits for testing, and is expected to receive many more in the coming days. Each kit can test 50 to 60 people, officials said.

Gov. Northam said the state is making plans for state employees to work remotely and officials have asked public school systems to report attendance data to the state health department as a means of monitoring children’s health in local communities.

Health officials urged people, including students, to stay home if they feel sick to stem the possible spread of COVID-19.

Gov. Northam and other officials said they are following guidance from the Atlanta-based federal Centers for Disease Control and Prevention and the World Health Organization for big picture assessments of the spread of the disease and advice and guidance on steps to take.

The governor said the state is in touch almost hourly with local health authorities as testing expands and health reporting improves. The virus, which is airborne, strikes people regardless of race, creed, national origin, income level or religious belief.

By midweek, about eight members of the U.S. House of Representatives, including Congressman Don Beyer of Northern Virginia, reported they had gone into voluntary isolation, or quarantine, based on their exposure to someone who has contracted the virus.

In New York, Gov. Andrew Cuomo placed a one-mile radius around New Rochelle, N.Y., in suburban Westchester County on a health alert, limiting access to the area based on fear some residents were suffering COVID-19 symptoms.

“People are being cautious about this virus because we don’t know how much it’s going to spread,” said Pam Cox, director around strategic communications at Virginia Union University.

She, along with spokespersons for other area colleges and universities, said the institution has set up a coronavirus task force to keep track of its students’ health and send out frequent medical alerts. She said the university consults with the Capital Area Health Network for medical guidance.

“You have to be vigilant and stay informed,” Ms. Cox said, noting that about 100 VUU students are in study abroad programs. She did not say whether they have been recalled to campus.

How is coronavirus spread?

Similar to other cold viruses, including the flu, coronavirus is spread through droplets that spray out from sneezes, coughs and runny noses. When someone coughs, you can inhale them, you can get them on your hands and then touch your mouth, your nose, your eyes. It is transmitted that way. It also may be able to live on surfaces for a certain amount of time, such as doorknobs, cell phones, desks and kitchen counters. You should clean those surfaces, as well as your hands.

What are the symptoms?

Similar to a cold or the flu, the symptoms can be mild. During the first two- to 14-day incubation period, you may see common things such as a fever, coughing or shortness of breath. If the symptoms worsen, such as a higher fever or trouble breathing, it could be a sign of something worse. Call your doctor or the local health department.

How is it diagnosed?

Diagnosis is made through a test using a sample of sputum or secretion, like a throat or nose swab. The test is sent to a lab where genetic material in the sample is analyzed to see if it matches this strain of coronavirus.

Who is at risk?

Anyone can get the coronavirus. Children don’t seem to be getting a severe illness. At most risk are people age 60 and older and those with underlying medical conditions, such as diabetes, heart, kidney or lung disease.

Is there a vaccine?

Not yet. Officials estimate there may be vaccine trials by mid-year, and perhaps a fully licensed and widely distributed vaccine by the end of the year or later.

How can I protect myself?

Wash hands with soap and water at least 20 seconds. Use hand sanitizer that’s at least 60 percent alcohol. Avoid touching your face and eyes.

Cough into a tissue or your elbow.

Wipe down all surfaces.

How should I prepare?

You may have to postpone travel plans and prepare to work or study from home. So have a two-week supply of things you need on hand at home, including food and any prescription medications.