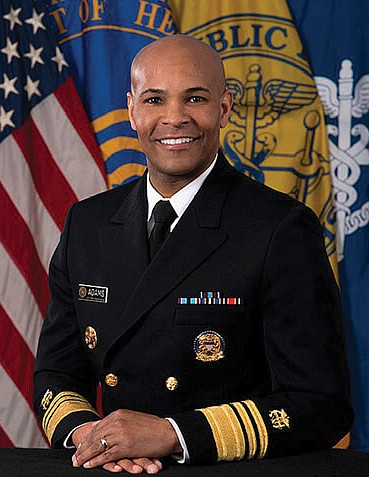 He has issued warnings about the dangers of e-cigarettes and gone on record supporting needle exchanges to limit disease related to opioid addiction.

Now Dr. Jerome Adams, who was appointed by President Trump in September as the 20th surgeon general of the United States, is in the spotlight as Americans seek health information they can trust to deal with the coronavirus pandemic.

In a teleconference last week, Dr. Adams, a 45-year-old anesthesiologist who served as the Indiana state health commissioner under then-governor and now Vice President Mike Pence, offered a matter-of-fact, straight-to-the-point introduction of himself to the NAACP and more than 21,000 listeners.

“Many of you don’t know me and, frankly, some of you don’t have a lot of trust in me or this administration. So, I’m going to take just a quick moment to give you some background,” Dr. Adams began.

“I personally grew up in a rural mostly white Southern community. I benefited from WIC, reduced lunch and other government assistance. All four of my grandparents died prematurely from chronic disease; my brother’s incarcerated due to his problems with and struggles with substance misuse; my mother had a major stroke last year; and I’m currently on eight different medications myself,” he said.

“I know what it’s like growing up poor, black and with minimal access to health care,”Dr.Adams continued. “And I’m personally experiencing the lifelong impacts that stem from that.

“I want you all to know I don’t affiliate with a party and I didn’t take my current job, which pays a whole lot less than being an anesthesiologist does, for political reasons. I’m a Christian and I believe God doesn’t put you where you’ll be comfortable. He puts you where he needs you to be.”

A native of Orange, N.J., Dr. Adams grew up in rural St. Mary’s County, Md., on his family’s farm. Interested in the sciences, he attended the University of Maryland Baltimore County on a full-tuition scholarship and earned dual bachelor’s degrees in biochemistry and biopsychology.

He went to Indiana University School of Medicine and completed an internal medicine internship and his residency in anesthesiology in Indiana. In 2000, he earned a master’s in public health from the University of California, Berkeley.

He spent two years in private practice at Ball Memorial Hospital in Muncie, Ind., and served as an assistant professor of anesthesiology at Indiana University before being appointed Indiana state health commissioner in 2014.

“Our issues as people of color are too important to go four years without representation in the highest levels of government,” he said on the teleconference. “And I have personally had

faith that I am put where I am most needed. “That said, I spent my life fighting and will keep fighting for the poor, the disadvantaged, the people of color. And I, along with the other health officials on the coronavirus task force ...want you to hear it from me. I hope I can earn your trust.”

Dr. Adams’ words were timely given that his boss, President Trump, early on publicly dismissed the coronavirus pandemic as a “Democratic hoax.”

Now the administration has declared a national emergency and President Trump and top federal medical experts, including Dr. Adams, are front and center almost daily at news briefings with the latest updates on the health crisis.

The key now is mitigation, Dr. Adams said during the teleconference.

“Mitigation means limiting the impact within our communities by social distancing and also protecting the most vulnerable,” he said.

During this period of quarantine and social distancing, Dr. Adams suggested connecting with friends and loved ones through FaceTime and Skype to continue social connections. He also recommended Americans “establish buddy systems” and check on elderly and vulnerable people by phone to make sure they are alright.

“Connections can give people strength to keep up and fight a national threat,” he said.

While he acknowledged that this can be a stressful time, he said resources to help manage stress and anxiety are available at the Centers for Disease Control and Prevention’s website at www.coronavirus.gov and the federal Disaster Distress Helpline at (800) 985-5990.