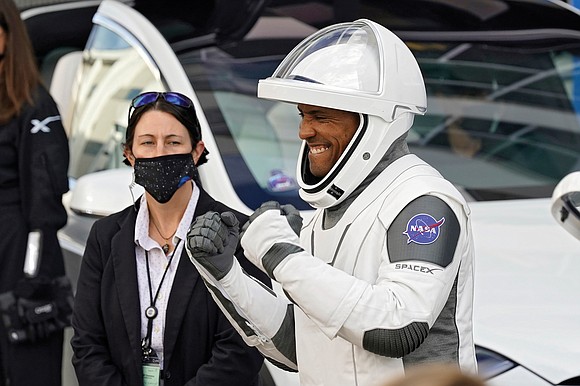 NASA astronaut Victor Glover reacts last Sunday to family members as he leaves the Operations and Checkout Building at the Kennedy Space Center with fellow crew members for a six-month mission to the International Space Station. Photo by John Raoux/Associated Press

Cmdr. Glover, the lone space rookie among the diverse crew that includes a woman and an astronaut from Japan, will be the first African-American astronaut to move into the Space Station for a long stay.

“We can’t wait to have you on board,” she added after the two spacecraft were latched together.

This is the second astronaut mission for SpaceX. But it’s the first time Elon Musk’s company delivered a crew for a full half-year station stay. The two-pilot test flight earlier this year lasted two months.

The three Americans and one Japanese astronaut will remain at the orbiting lab until their replacements arrive on another Dragon in April. And so it will go, with SpaceX — and eventually Boeing — transporting astronauts to and from the station for NASA.

This regular taxi service got underway with Sunday night’s launch.

The four named their capsule Resilience to provide hope and inspiration during an especially difficult year for the whole world. They broadcast a tour of their capsule Monday, showing off the touchscreen controls, storage areas and their zero gravity indicator: A small, plush Baby Yoda.

Ms. Walker said it was a little tighter for them than for the two astronauts on the test flight.

“We sort of dance around each other to stay out of each other’s way,” she said.

Cmdr. Glover, who is from the Los Angeles area, wrestled and played football at California Polytechnic State University. When picked as a NASA astronaut in 2013, he was working as a legislative fellow for the late Sen. John McCain. He and wife, Dionna, have four daughters.

Ms. Walker, 55, a Houston-born-and-raised physicist, also has lived before on the space station. Her husband, retired astronaut Andrew Thomas, helped build the outpost. She worked as a flight controller at NASA’s Johnson Space Center and then behind the scenes in the space station program, before becoming an astronaut in 2004. Her graduate studies at Rice University focused on the atmosphere of Venus.

Crew commander Hopkins, 51, is an Air Force colonel and former space station resident who grew up on a hog and cattle farm in Missouri. He played football for the University of Illinois and, before becoming an astronaut in 2009, worked at the Pentagon. He was working as a special assistant to the vice chairman of the Joint Chiefs of Staff when he got the call from NASA. He and wife, Julie, have two college-age sons.

The Japanese Space Agency’s Noguchi, 55, another former station resident, is only the third person to launch on three types of spacecraft. (He follows the late Wally Schirra and John Young.) He’s already flown on a U.S. space shuttle — the first mission after the 2003 Columbia accident — and a Russian Soyuz. A three-time graduate of the University of Tokyo, the engineer and longtime Scout became an astronaut in 1996. His two grown daughters live in Tokyo; his youngest joined him and his wife, Miwa, in Houston.

For Sunday’s launch, NASA kept guests to a minimum because of the coronavirus, and even Mr. Musk had to stay away after tweeting that he “most likely” had an infection. He was replaced in his official launch duties by SpaceX President Gwynne Shotwell, who assured reporters that Mr. Musk was still very much involved with Sunday night’s action, although remotely.

As they prepared for the space station linkup, the Dragon crew beamed down live window views of New Zealand and a brilliant blue, cloud-streaked Pacific 250 miles below.

“It looks amazing from up here, too,” Col. Hopkins replied.