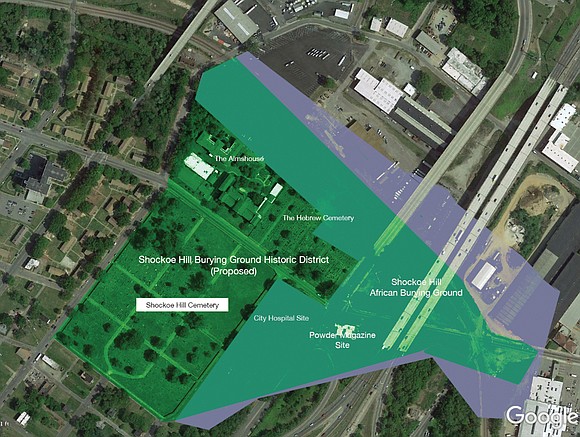 The city’s leadership is moving to reverse a nearly 130-year effort to eliminate a major Black cemetery.

Richmond City Council cleared the way Monday night for the city to reacquire 1305 N. 5th St., the original portion of an expansive, but unmarked cemetery where 22,000 enslaved and free people were buried between 1816 and 1879.

Railroad tracks and Interstate 64 were built through the land, and the city sold the property to a private buyer who built a service station there that closed years ago.

Lenora C. McQueen stands in the forgotten Grave Yard for Free People of Colour and For Slaves during a visit to Richmond. Behind her is the vacant, graffiti-marked mechanic’s shop at 1305 N. 5th St. In the background is the Hebrew Cemetery.

The 9-0 vote to recover the property and recognize it as a cemetery caps a three-year campaign led by Texas educator Lenora C. McQueen after discovering that some of her ancestors were buried there.

The vote highlighted the meeting at which City Council also killed a resolution that called on Mayor Levar M. Stoney’s administration to ban Richmond Police from using tear gas, pepper spray, rubber bullets and other injurious, but non-lethal deterrents to disperse gatherings that are declared unlawful.

By a 7-2 vote, the council refused to revive the resolution introduced in July by 5th District Councilwoman Stephanie Lynch and 9th District Councilman Michael J. Jones after they experienced police tear-gassing Black Lives Matter demonstrators in June. The vote upheld the Public Safety Committee’s request that it be stricken from the docket.

Meanwhile, Ms. McQueen was pleased after listening virtually to the City Council meeting and the vote approving the ordinance that Mayor Levar M. Stoney proposed to extend the city’s Slave Trail to include the former cemetery property at 5th and Hospital streets in North Side.

The vote enables the city to tap a $1 million state grant to gain title to the land and follows the council’s Sept. 28 approval of the mayor’s recommendation to invest $1.7 million to create a 9-acre slavery memorial park and museum in Shockoe Bottom.

Ms. McQueen found the cemetery property on a journey of discovery about her ancestors and got involved when she found the burial site was on the verge of being sold for unpaid taxes.

Ms. McQueen secured help in 2017 from 6th District City Councilwoman Ellen F. Robertson to stop the sale. Her continuing and detailed research on the site with university historians has since put the site on the road to gaining state and national landmark status as the Shockoe Hill African Burial Ground.

During the City Council meeting, Ms. McQueen offered thanks, but also reminded council members that the plot to be acquired is just one part of the area used for the burial of Black people.

She noted, for example, that a grassy area outside the east wall of the city’s Shockoe Hill Cemetery is another unrecognized section of what she and others believe was the largest municipal burial ground for Black people in this country.

Before the vote, Ms. Robertson credited Ms. McQueen’s research and dogged persistence with making possible an ordinance that “tells the painful history of Richmond and the lack of recognition of African-Americans as a people and as human beings.”

“The City of Richmond has done a lot of horrible things, but desecrating graves is pretty low and takes it to another category,” Mr. Hilbert said.

He called what the city had done to the cemetery “disgraceful” and called it right and appropriate that the city “put this property back on the map so it cannot ever again be ignored.”