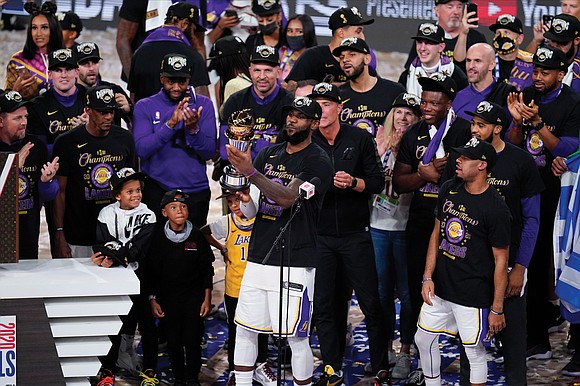 If LeBron James ever wants to make a case for being the NBA’s greatest ever, he might submit the video of Game 6 of the 2020 NBA Finals as compelling evidence.

In his 17th season and at age 35, James was as dominant as ever in leading the Los Angeles Lakers to a climactic 106-93 close-out win last Sunday over the Miami Heat.

The Lakers led by 28 points at halftime and were never threatened in the second half.

Competing at the Walt Disney World Resort outside Orlando, Fla., James had 28 points,14 rebounds and 10 assists. For much of the game, the 6-foot-9 veteran served as the Lakers’ point guard, directing a well-oiled offense.

“This is right up there with one of the greatest accomplishments I have,” James told the media afterward.

This was the Lakers’ 17th NBA title, tying the Boston Celtics on the all-time list. Los Angeles last won the crown in 2010, and hadn’t made the playoffs since 2013.

James joined the Lakers a year ago but missed a large chunk of the season with a groin injury and the Lakers failed to qualify for the postseason.

This season with newcomer Anthony Davis spicing up the Lakers’ winning recipe, Los Angeles was 52-19 during the regular season and 16-5 in the playoffs.

The James-Davis duo figures to keep the Lakers at or near the top for the foreseeable future. Davis had 19 points and 15 rebounds to support James in Game 6, while Rajon Rondo had 19 points and four assists coming off the bench.

“Thinking I have something to prove fuels me,” James told the media. “And it fueled me over the last year and a half after my injury.”

“He’s the greatest player the basketball universe has ever seen. And if you think you know, you don’t know, OK, until you’re around him every day. He was terrific all season leading us, and I can’t say enough about him.”

Still, with greatness comes criticism and James forever seems to be under the microscope. Many contend the great Jordan was the best to ever lace up a pair of sneakers.

Jordan or James for G.O.A.T.? The jury should remain out until all the information is in.

Unfortunately for his critics and adversaries, his tank is far from empty.