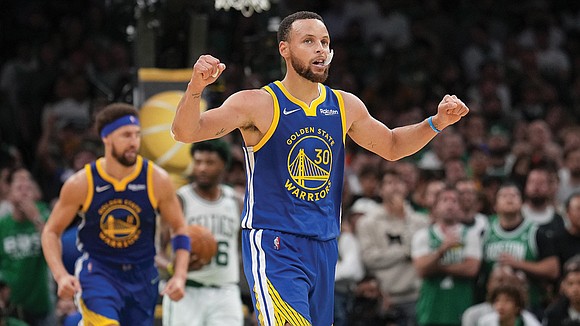 Now it’s Steph Curry’s turn to enjoy the view from the best seat on the summit.

The “Curry Era” is still gaining momentum for the Golden State Warriors, now winners of four of the last eight NBA titles.

Arguably the greatest shooter ever, Curry was at his scintillating best in leading “The Dubs” to a 4-2 series victory over Boston in this year’s grand finale.

In the decisive Game 6, Curry had 34 points, seven rebounds and seven assists as Golden State won,103-90, in front of a salty audience in Boston.

In six jaw-dropping outings in the Finals, Curry averaged 31.2 points, six rebounds and five assists, while popping the nets at 44 percent from beyond the arc. To the surprise of no one, he was the unanimous Finals MVP.

In ranking the greatest players in history, Curry now boasts this resume:

Curry, now 34, is still lean, quick and shoots with stunning accuracy. While he generally is the team’s leading man, he had plenty of help from his supporting cast. Draymond Green and Klay Thompson have been a part of the same four titles (2015, 2017, 2018 and 2022). This time Andrew Wiggins, who joined the roster in 2020, emerged as another go-to man in the clutch.

Injuries to Curry and Green, as well as Kevin Durant’s departure, may have prevented the Warriors from more titles. Curry played only five games in 2019-20, while Green was in uniform just 43 times that same season. Thompson has also battled through injuries.

After three brilliant seasons with Golden State, Durant departed for Brooklyn. Durant was Finals MVP in 2017 and 2018, helping Warriors to titles both years.

Now there are 30 teams and four grueling rounds of playoffs.

Jordan’s six titles in eight years with Chicago is a more realistic comparison to today’s NBA. Johnson won five, 1980-88, with the Lakers; Jabbar captured six, 1971 to 1988, with Milwaukee and the Lakers; James had four, 2012 to 2020, with Miami, Cleveland and the Lakers.

The Warriors have won seven NBA championships, starting with 1947 and 1956 when the franchise was in Philadelphia. Their first title on the West Coast was in 1975. It was a racial first in that both coaches (Al Attles for the Warriors, K.C. Jones for Washington) were Black.

Golden State, then called San Francisco, never won an NBA title in the mid-1960s when it had four Hall of Famers—Wilt Chamberlain, Guy Rodgers, Nate Thurmond and Attles—on the same roster.

Before Curry became a perennial NBA All- Star, he was an All-American guard at Davidson College, where he led the Wildcats to the NCAA Elite Eight in 2008.

On Aug. 31, his No. 30 will be retired by his alma mater. Curry wears the same number for Golden State.