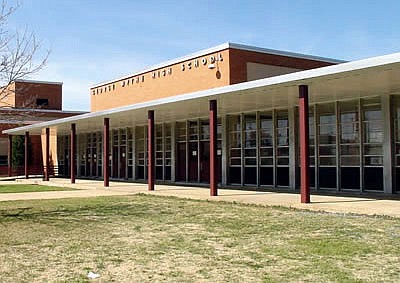 City Hall is poised to move faster to replace George Wythe High School in South Side, the Free Press has learned.

Mayor Levar M. Stoney, who is up for re-election, is expected to announce shortly that the city plans to move ahead with design and development of a new school building that the Richmond School Board has listed as a top priority, according to two insiders who requested anonymity because they are not authorized to discuss the development publicly.

The announcement was to be made 4 p.m. Thursday, Oct. 22, the Free Press was told.

The mayor is anticipated to disclose that the city plans to use its line of bank credit to jumpstart the initial phases that precede construction.

The city has long used a line of credit to pay for projects — including the three newly finished school buildings — before selling long-term bonds several years later to spread the full cost over a longer period. The city generally only pays interest on the line of credit.

Last year, city officials told the Richmond Free Press that that line of credit, like its bonding capacity, would not allow additional projects like George Wythe. But a source told the Free Press last week that a review has now found it is possible to use that approach.

That could cut two to three years off the projected timeline for design and construction of the new building.

Replacing George Wythe High School was not expected to begin for several years. Under a plan advanced by the mayor that City Council approved in January 2019 and reaffirmed this year, the city is making plans to borrow an additional $200 million in the 2024-25 fiscal year to replace more outdated school buildings, with George Wythe being among them.

The cost of replacing George Wythe with a new building that can hold up to 2,000 students was pegged at $85 million in 2018.

Because of the cost, Mayor Stoney dropped the high school from the package of schools to be replaced when he won council support in early 2018 for raising the city meals tax by 1.5 percent to pay for new school construction.

At the time, the mayor said the $150 million the tax would support should stretch enough to cover the cost of replacing or remodeling five buildings. Ultimately, the funding only produced a new middle school and two new elementary schools that were finished in August, but remain closed because of the pandemic.

The pandemic also has reduced the amount of money generated by the city meals tax, which was estimated at $9 million a year to repay the nearly $150 million cost of the three new school buildings.

Behind the scenes, credit for this change in plans is going to advocates who continued to push for replacement of the George Wythe High School building, which is listed among the school facilities in the worst condition.