Spotlight on co-creator of The JXN Project 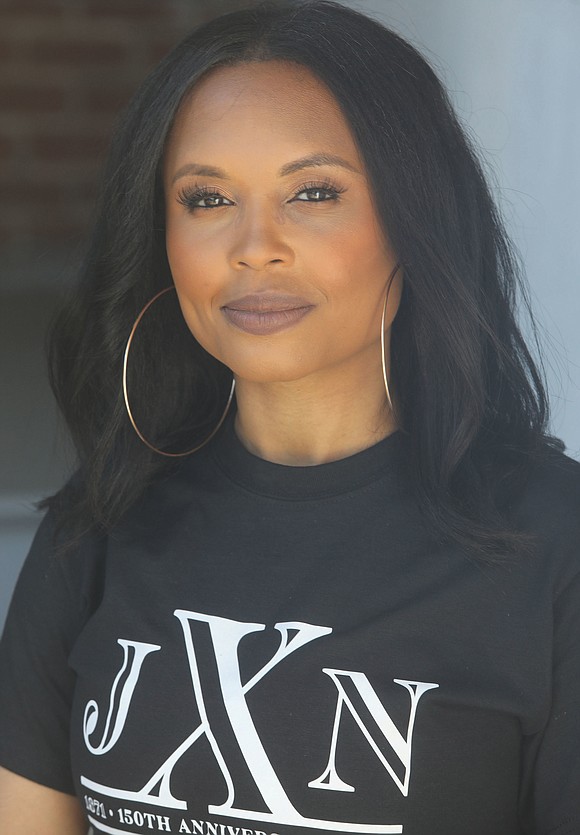 The 150th anniversary of Jackson Ward’s creation is close, and Dr. Sesha Joi Moon is intent on seeing that the full history of the district in Downtown is recognized and celebrated.

Dr. Moon and her sister, Enjoli Moon, are co-creators of The JXN Project, which seeks to “excavate, elevate and educate” people on the hidden histories and origins of the first historically registered African-American neighborhood in America.

A celebration this Saturday, April 17, called “Illuminating Legacies: Giles B. Jackson Day,” will be the first in what Dr. Moon says is a multi-part effort to explore and undo long-lasting wrongs within the area, and the city at large.

“Jackson Ward is a community steeped in culture and rich in history – a history whose multiple layers have yet to be unearthed,” Dr. Moon says.

Formally founded in December 2020 following months of discussion, The JXN Project has mapped out a long-term strategy to ensure racial equity and empowerment in the city’s approach to its own legacy.

“Illuminating Legacies: Giles B. Jackson Day” will be held 6 to 10 p.m. in Jackson Ward, featuring a series of “socially distanced activations,” including tours, art activities and projections throughout Jackson Ward that can been seen while walking or driving through the community in Downtown.

Guided tours via trolley, tuk tuks and on foot begin on the 3rd Street side of the Greater Richmond Convention Center and will be guided by Gary Flowers of The Gary Flowers Show; Benjamin Ross, historian at Sixth Mount Zion Baptist Church; Janine Bell of the Elegba Folklore Society; and Ana Edwards of the American Civil War Museum.

Details about Saturday’s event are at https://thejxnproject.com/jxn-events.

The celebration will be followed Wednesday, April 21, with a virtual lecture at 7 p.m. kicking off a six-part series to discuss the project.

The initiative ends later this year with “Unveiling the Vanguard” during the annual 2nd Street Festival that recaptures the essence of Jackson Ward.

Work of this scale would be difficult for many, but doesn’t seem to faze Dr. Moon, a Richmond native and Northern Virginia resident who leads similar initiatives through her professional and volunteer work. Her hope is that The JXN Project’s work will recontextualize the his- toric district in honor of Giles B. Jackson, an attorney, newspaper publisher and civil rights activist who some speculate Jackson Ward is named for. But there are others, including Confederates, that people believe the district is named after, and Dr. Moon is working to uncover that part of the neighborhood’s story.

The JXN Project also aims to rename Jackson Ward’s streets from those of slavers and their sympathizers to honorary designations for notable Black Richmonders connected to Jackson Ward, such as Maggie L. Walker and John Mitchell Jr.

The JXN Project also has petitioned for increased representation of Black people on city commissions and committees.

With Jackson Ward, Dr. Moon believes Richmond has the opportunity to confront longstanding problems and to chart a better future.

No. 1 volunteer position: Co-creator of The JXN Project.

Date and place of birth: Sept. 20 in Richmond.

Where I live now: Northern Virginia.

Occupation: Director of diversity, equity and inclusion at the National Institute of Standards and Technology.

The JXN Project goals: The JXN Project aims to celebrate the 150th anniversary of Jackson Ward through a yearlong sesquicentennial celebration beginning on Saturday, April 17, with “Illuminating Legacies: Giles B. Jackson Day” and Festival.

The JXN Project is grounded in Richmond. However, as 1 in 4 Black Americans can retrace their roots to its riverfront, JXN endeavors to guide other communities along the journey in using research to reconcile fact and folklore in the recovery of their respective origin stories.

Where is Jackson Ward: Within a historical context, Jackson Ward was established as a gerrymandered political boundary on April 17, 1871, which originally extended from 18th Street to Leigh Street along the corporation toward the northern neck of the city.

How Jackson Ward got its name: The origin of the name “Jackson Ward” has been in contention since as early as 1902 and generally is attributed to one of the following: Col. Giles Beecher Jackson, James Jackson of the Beer Garden, President Andrew Jackson or Confederate Gen. Thomas “Stonewall” Jackson.

While the origins of the name of the ward may have been a debate for the last 150 years, The JXN Project endeavors to ensure that it’s not in dispute for the next 150 years because no other “Jackson” is more deserving than Giles B. Jackson. Richmond and Jackson Ward’s complex relationship: Jackson Ward is a microcosm of Richmond, as both the birthplace and blueprint of both the concept of American Whiteness and Blackness. The ward has not only been gerrymandered, redlined and gentrified — at times only looking like a shell of its former self as the “Harlem of the South” and/or “Black Wall Street” — but its actual name, as well as its surrounding streets, show that the stains of the Confederacy bleed far beyond Monument Avenue.

Importance of knowing history: The JXN Project is working to honestly and accurately capture the pivotal role of Richmond in the evolution of the Black American experience. The research that undergirds this project has revealed that the history of something as seemingly simple as a name extends far beyond the monuments and can be traced to the gerrymandered origins of the city’s northern neck, better known as Jackson Ward.

Jackson Ward is a community steeped in culture and rich in history, a history whose multiple layers have yet to be unearthed. In truth, the origins of Jackson Ward are complex and ugly. Often under-told, the ward was founded on exploited labor and was shaped over centuries by systems designed to oppress its residents — an impact still felt today.

Also felt, however, especially when understanding the urbanized slavery system, is the pride that the legacy of Jackson Ward conjures up for the Richmond community, particularly Black Richmonders who, as residents, have built a legacy rooted in ambition, creativity, resilience and the sheer will to create a better life for themselves, their families and their city.

How I start the day: In the wake of COVID-19, I am much more intentional with starting my day, first, by thanking the Creator for seeing another day, followed by a prayer of protection and peace for my loved ones.

Three words that best describe me: A walking contradiction.

How I unwind: Running.

What I have learned about myself during the pandemic: Two things — first, that I absolutely love therapy. And second, that I would become a great dog mom and fall head over heels in love with my wife’s and my mini cockapoo, Benji Pritchett-Moon.

Something I love to do that most people would never imagine: It would be a tie between my obsession with Bravo, especially “Real Housewives,” or my fascination with YouTube, especially mukbangs.

At the top of my “to-do” list: This, too, is a tie that I’m going to answer within the context of what’s top of the list when the pandemic passes — either going to a Beyoncé concert or going to an amusement park, both of which are two of my favorite pastimes.

What I’m reading now: “Life After Death” by Sister Soul-jah.