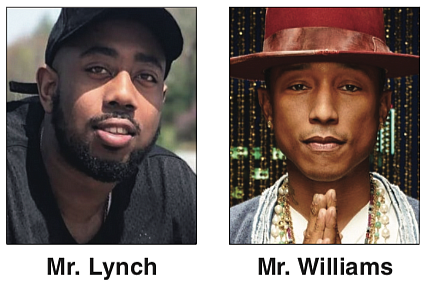 VIRGINIA BEACH - A special grand jury found that a Virginia Beach police officer was justified in fatally shooting a man armed with a gun during a chaotic night of violence on the city’s oceanfront this spring, authorities said late last month.

The death of Donovan Lynch has drawn heightened scrutiny because he is a cousin of Virginia Beach native and Grammy Award-winning musician Pharrell Williams. Mr. Lynch’s father also has filed a $50 million wrongful death lawsuit against Virginia Beach Police Officer Solomon D. Simmons, who is Black, and the City of Virginia Beach for allegedly failing to train its officers.

During a two-hour news conference on Nov. 30, the city’s prosecutors said Officer Simmons was justified in protecting himself and others in the moments after Mr. Lynch racked a round into his handgun’s chamber and stood — pointing his weapon toward a parking lot filled with multiple people and police.

“There were numerous people in that parking lot when Officer Simmons saw Mr. Lynch starting to come up with the firearm,” Virginia Beach Commonwealth’s Attorney Colin Stolle said. “So it is not only just whether the weapon was pointed at Officer Simmons. It was also are the people in the parking lot at risk?”

Mr. Lynch, 25, of Virginia Beach, was an offensive lineman for the University of Virginia’s College at Wise during the 2017 and 2018 seasons and a 2019 graduate of the school.

Mr. Lynch and a friend were visiting the city’s boardwalk, which is lined with restaurants and hotels, on a warm spring night that drew crowds of people. The evening dissolved into chaos after separate eruptions of gunfire. At least eight people were wounded and one woman, who was believed to be a bystander, was killed.

Prosecutors also presented a videotaped statement from Officer Simmons, whose body camera had not been turned on during the shooting.

Scott Lang, chief deputy commonwealth’s attorney, said Officer Simmons turned off his body camera because he began to drive to a hospital for an investigation involving a separate shooting victim. But then another shooting in which 50 rounds were fired in a parking lot broke out, Mr. Lang said.

In the lawsuit, Mr. Lynch’s father, Wayne Lynch, accuses Officer Simmons of shooting his son “immediately, unlawfully and without warning,” according to news reports.

Darrion Marsh, a friend of Mr. Lynch’s who said he witnessed the shooting, told The Virginian-Pilot newspaper earlier this year that Mr. Lynch never took the gun out of his cargo shorts.

Mr. Lang pointed out that police with body cameras arrived at the scene within 25 to 30 seconds. He said the footage did not show Mr. Lynch’s friend in the immediate area. Fallout from Mr. Lynch’s death continues to reverberate in Virginia Beach. Mr. Williams sent a letter to Virginia Beach officials in October saying he won’t bring his “Something in the Water” music festival back to the oceanfront, partly because of how the city handled the investigation into his cousin’s death. The festival reportedly brought a $24.11 million economic boost to the city when it was held in 2019. The festival’s success cast Virginia Beach into the national and international spotlight, with a host of big-name talent and sponsors. Roughly 25,000 tickets to the festival sold out in 21 minutes. Hotel occupancy that weekend was logged at 90 percent.

Mr. Williams, who has turned his attention and latest development efforts to Norfolk, will be the winter commencement speaker this Saturday, Dec. 11, at Norfolk State University. The in-person ceremony will be held at Joseph G. Echols Memorial Hall on the NSU campus.