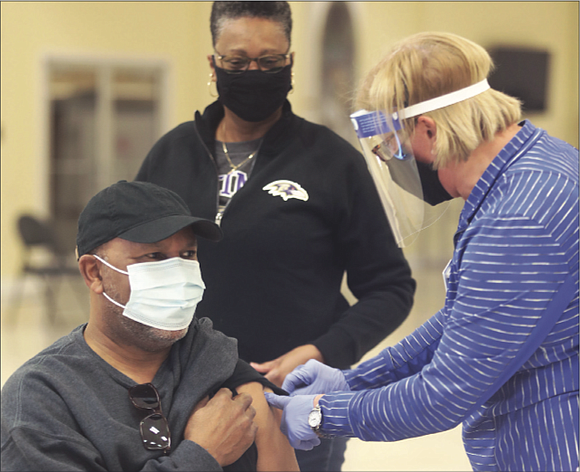 Sylvia Jones, 68, watches as her husband, George Jones, 69, receives his first shot of the COVID-19 vaccine. The couple, members of Second Baptist Church of South Richmond, were inoculated during a vaccine event held at the church by the Richmond and Henrico health districts. Photo by Regina H. Boone

A chance to avoid further danger and tragedy.A message from a trusted pastor or fellow church member. An opportunity to keep themselves, their friends and their families safe.

These reasons and others compelled seniors to get vaccinated against COVID-19 last Friday and Saturday during events held by the Richmond and Henrico health districts.

The events, held at sites ranging from local apartments to Black churches, were part of the health districts’ efforts to expand inoculation sites and diffuse criticism over inequitable distribution of the vaccine to African-American and Latino communities.

Maura Bryant, 87, didn’t hesitate at the opportunity to get her first shot last Friday at the Fox Manor Apartments on West 27th Street in South Side. Several of her family members and friends have been infected with COVID-19, she said. Some have died, including her husband in May.

“I’ve been waiting on this shot,” said Mrs. Bryant, who attended the event with her grandson and caregiver Antwoine White. “I wanted to take it as quick as I could.”

That need to ensure all bases are covered is paramount, particularly because of the gap between the number of people of color receiving the vaccine and Caucasians in Virginia. According to Wednesday’s figures for whom racial and ethnic data is avail- able, white people accounted for 71.5 percent of the people receiving at least their first dose of the vaccine, compared to 12 percent for African-Americans and 5.59 percent for Latinos.

“The small amount of data that we do have suggests that Black and Latino (residents) are not getting the vaccine at the same rate as our white Richmonders,” said Catherine Long, public information officer for the Richmond-Henrico Health District. “We’re doing events like these to make sure that everyone has access.”

A similar focus on the marginalized and overlooked motivated five small vaccination events each aiming to inoculate 100 to 125 people last Saturday. The sites included Second Baptist Church in South Side and First African Baptist Church in North Side. The events were held in partnership with VCU Medical Center, Bon Secours and the Baptist Minister Conference of Richmond and Vicinity.

The small interior space at Fox Manor Apartments made social distancing guidelines more difficult to follow, particularly as a crowd of seniors showed up early for the four-hour event that ended at noon. Still, the health districts met its goal of vaccinating 40 people.

People make their way inside Second Baptist Church of South Richmond, which was among five sites where people were being vaccinated against COVID-19 Saturday in events held by the area health districts in partnership with VCU Health, Bon Secours and the Baptist Minister Conference of Virginia and Vicinity. More than 100 people were inoculated at the church.

By contrast, Second Baptist Church was able to handle the prospect of 100 potential patients with no problem, thanks to the preparation of Pastor Ralph S. Hodge and about 40 volunteers from the church who helped health district staff and Virginia Medical Reserve Corps volunteers.

“Having your pastor call and tell you to get a vaccination is going to motivate you,” Rev. Hodge said. “Whether people like churches or not, we’re credible messengers in the community.”

“It was a great atmosphere, everything was set up very efficient,” said George Jones, 69, a church member who attended the event with his wife, Sylvia. “It was like coming home, almost.”

Community leaders have questioned the state’s choice to provide vaccines through chain pharmacies, saying those vaccination efforts aren’t reaching the people most vulnerable to the virus.

Adding to these concerns, the planned CVS Health rollout fell apart on Tuesday as the attempt to give early access to those age 65 and older who have pre-registered with the health department collapsed. Appointments were open to everyone, leading to mass confusion and official efforts to address the issue.

“CVS was very willing to explore opportunities with us, but they were not able to deliver a technological solution,” said Dr. Danny T.K. Avula, vaccine coordinator for the Virginia Department of Health, during a press conference Tuesday afternoon. “So, not an ideal rollout, but at the end of the day we are thankful. It’s a way to pull down more vaccines into Virginia.”

Still, three to five mass vaccination events are being planned weekly, officials said, with the goal of vaccinating about 1,000 people at each one. Another four to eight weekly mobile events also are in the works, with each vaccinating about 100 people, along with events in partnership with faith communities.