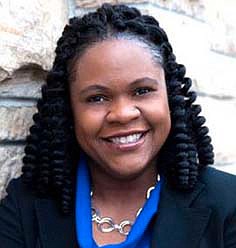 Dean Yolanda Pierce of the Howard University School of Divinity has been shaped by, and now teaches, womanist theology, the study of religion through the lens of gender, race and class.

The first woman to lead the predominantly Black theological school in its 150-year history has written a book chronicling how that theology stretches back generations before the term was used.

“In My Grandmother’s House: Black Women, Faith, and the Stories We Inherit” was released Tuesday.

“If the only theology we have is (Martin) Luther or (John) Calvin, then we’re missing how God moves in a world for a group of people who don’t know Luther or Calvin, will never read (their) work nor are interested in the 1500s in which they lived,” she said. “So I’m really trying to shift the discourse about who can do theology and what counts as theological source material.”

Dr. Pierce, who is in her 40s and identifies as a Pentecostal, talked with Religion News Service about what she learned from her grandmother, the kinds of hymns she doesn’t sing and her expectations about the future of the Black church.

In the preface of your book, you described “grandmother theology” as “a subset of womanist theology.” Please explain the connection between the two.

Can you define “woman-ist theology” for the average person who may not use it much?

Womanist theology was created in the 1960s and 1970s to address the fact that much of the theology being done in the academy excluded communities of color, and then much of early Black theology excluded the voices of women. Womanist theology was birthed by Black women who wanted to see themselves, the concerns of their communities, addressed within the theological discourse. With Black women making up the majority and sometimes as much as 80, 90 percent of the church, it felt like such a shame the theology wasn’t reflecting the experiences of the people who are its most faithful witnesses.

Even with that kind of power of women you speak of in your book, you also describe women — especially at your grandmother’s Brooklyn, N.Y., church — maintaining some of the patriarchal traditions of the church as you grew up, including modest dress. What did you learn from that tension?

You described how your grandparents displayed a picture depicting Jesus as a Black man and how the color- ing book someone gave you as a child on an Easter Sunday that had a white Jesus on the cover disappeared before you got home from church. How did these decisions about the color of Jesus shape you?

I talk about Black Jesus in order to interrupt the notion that Jesus comes from Europe, but instead really is birthed in the Afro-Asiatic cradle. I never until I was an adult saw images of white Jesus. And it’s only as an adult I appreciated that what they were trying to give me was a sense of the divine — who looked like me and could love me, a little brown girl — who was not outside of my family tree, but was a part of my own spiritual lineage.