Harry F. Byrd statue to be moved from Capitol Square 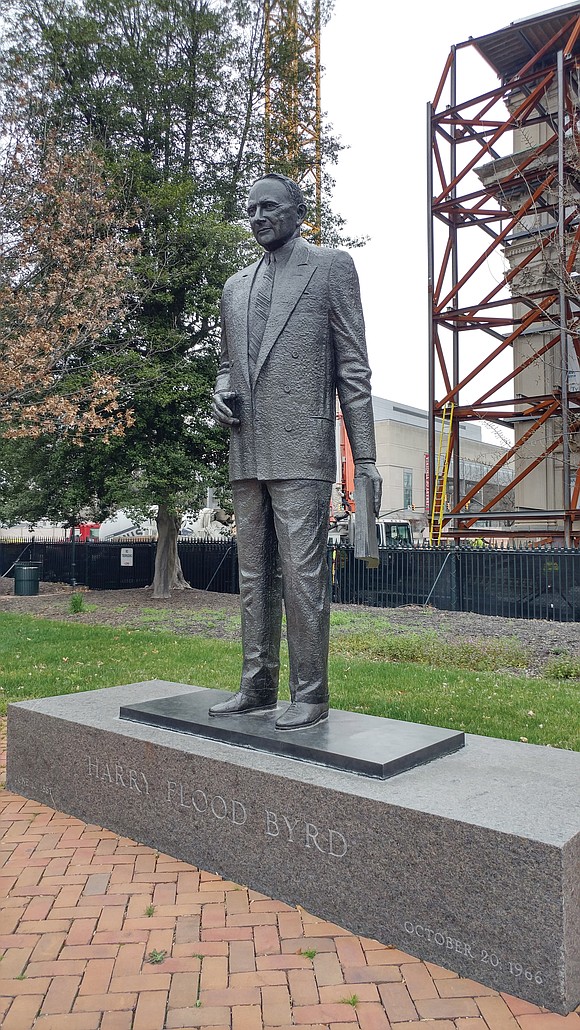 The statue of Harry F. Byrd Sr., an icon of white supremacy and Black oppression, is to be moved after 45 years haunting the grounds of the Virginia Capitol.

On a 36-3 vote Tuesday, the state Senate joined the House of Delegates in directing Gov. Ralph S. Northam to get rid of the monument to the man best known for orchestrating “Massive Resistance” to the U.S. Supreme Court rulings of the 1950s outlawing government-enforced racial segregation in public schools and other places.

“Capitol Square is the ultimate state park and should reflect the values of our Commonwealth,” Richmond state Sen. Jennifer L. McClellan said in remarks from the Senate floor before the vote. “Racism and its symbols, obvious and subtle, have no place.

“I think about the damage (Sen. Byrd) inflicted on this Commonwealth and on the African-American community, which we are still trying to eradicate. He does not belong,” Sen. McClellan said.

Sen. McClellan, a member of the Virginia Legislative Black Caucus, is running for the Democratic nomination for governor. The action sends the bill sponsored by Norfolk Delegate Jay Jones to the governor, who has promised to sign it and carry out its directive.

The Byrd statue has been in place since 1976 and was designed to honor the former governor, U.S. senator and political boss who ruled the state for 40 years before his death in 1966.

Delegate Jones, also a VLBC member who is running for attorney general, cheered the passage of the legislation that cleared the House on a 63-34 vote in late January.

“Monuments to segregation, Massive Resistance and the sub- jugation of one race below another, such as the Byrd statue, serve only as a reminder of the overt and institutional racism that has and continues to plague our Commonwealth,” Delegate Jones stated.

The Senate vote, as supportive Republican Sen. David R. Suetterlein of Salem reminded, took place just ahead of the 65th anniversary of then Sen. Byrd’s issuance of the Southern Manifesto. The manifesto he released on Feb. 25, 1956, called for the use of every legal means to resist and overturn the U.S. Supreme Court’s rulings rejecting the right of states to maintain a system of racial segregation.

Warrenton Republican Sen. Jill H. Vogel, who voted against the statue’s removal, noted that despite the stain of Massive Resistance, Sen. Byrd had been a key figure in state history, responsible for building the state’s highway system and creating the park system.

Senate Majority Leader Richard L. “Dick” Saslaw of Fairfax County responded that Sen. Vogel’s statements were akin to the joke about the assassination of President Lincoln at Ford’s Theater: “Other than that, Mrs. Lincoln, how was the play?”

The effort to remove the statue ironically began last year with a Republican delegate who opposed the removal of Confederate statues from the Capitol building. He sponsored a bill to remove the statue of Byrd, a Democrat, that he later withdrew. But Democrats quickly picked it up. Initially, they agreed to consider adding signs noting Sen. Byrd’s racist history but dropped that idea this session in favor of elimination.

“There is no way to contextualize Harry Byrd,” said Sen. McClellan, a view that ultimately earned the support of most in the legislature.