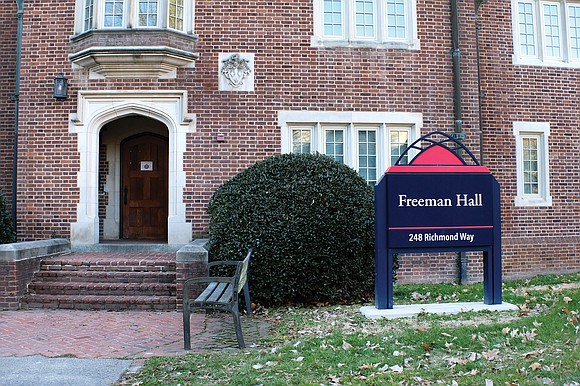 Dr. Ronald A. Crutcher is taking a more nuanced approach to dealing with the racist parts of University of Richmond’s history and the long overlooked Black people who are part of it.

Instead of completely erasing or replacing names of segregationists on buildings such as Virginia Commonwealth University and other public institutions in the state have done, UR’s first Black president announced plans for inclusion of Black history in the campus narrative to “spark conversation and understanding” among students and anyone else who comes to campus. 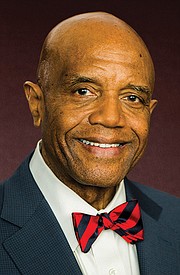 Dr. Crutcher said that with the approval of UR’s board and the Mitchell family, the name of banker and fiery Black newspaper editor John Mitchell Jr. will be added to transform the name to Mitchell-Freeman Hall.

Dr. Crutcher said he believes that linking the names of two men with vastly different approaches to race and racism will be meaningful.

In his view, “the Freeman name will exemplify how prominent and well-regarded people embraced white supremacy and promoted the idea that the Black race was inferior to justify oppression and exclusion.”

At the same time, Dr. Crutcher said, the inclusion of the “Mitchell name will highlight the lived experience of those on our campus and in our city who both suffered through and subverted racial oppression — and to recognize the resilience of African-Americans in the face of centuries of injustice.”

In the second change, UR plans to incorporate Black history into Ryland Hall, a main academic building now undergoing a $25 million renovation. While the building’s name will not change, the terrace will be named for one or more of the enslaved people who worked at the school until the Union won the Civil War, Dr. Crutcher aid.

One wing of the hall is named for the Rev. Robert Ryland, UR’s first president, a slave-owning, Confederate supporter who was instrumental in the development of UR and also was the first pastor of First African Baptist Church. The other wing is name for his nephew, Charles H. Ryland, the first librarian.

The names of the enslaved to be considered are those whom Rev. Ryland owned and hired out to work at the university and for others, according to UR’s research.

A letter about the changes is being distributed Thursday to the campus community.

Dr. Crutcher said that he and the board considered student government organizations’ call to change the names of both buildings, but ultimately rejected that approach.

“I firmly believe that removing the Ryland and Freeman names would not compel us to do the hard, necessary and uncomfortable work of grappling with the university’s ties to slavery and segregation,” he said. “It would not help us achieve a fuller understanding of Black history, which most in our country still do not recognize as an essential part of American history. It would instead lead to further cultural and institutional silence and, ultimately, forgetting.”

To help add to the dialogue, UR plans to create interactive displays to help those on campus delve deeper into UR’s Black and white history.

That includes the forgotten fact that the Westhampton campus of the university was once owned by a Black fraternal insurance society, the Grand Fountain of the United Order of True Reformers led by William Washington Browne.

Under Mr. Browne’s leadership, the True Reformers opened in 1889 in Richmond the first bank owned and operated by Black people in Virginia and only the second in the United States. In 1897, the organization purchased part of what is now the UR campus with a vision for development that was never realized.

The university also is working on memorializing a Black cemetery that was desecrated decades ago during building construction.

As he views it, “The path we are forging will amplify the nuances and tensions of our history in a way our university has never done before, expanding upon the more common but woefully incomplete narrative of our history.”

Dr. Crutcher’s hope is that “no Richmond graduate should leave us without a deeper understanding of the roles of slavery and segregation in our institution, our state, and our nation.”

And last week, James Madison University renamed three buildings on its Harrisonburg campus in honor of African-American contributors to the university. The Feb. 19 action came six months after the JMU board eliminated the names of Confederate military leaders.

The JMU board approved naming one building Gabbin Hall to honor Drs. Joanne V. and Alexander L. Gabbin, professors at JMU for more than 35 years.