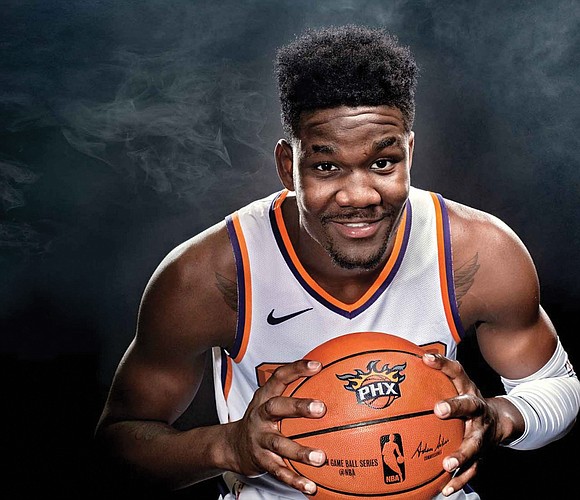 With the very first pick of the 2018 NBA Draft, the Phoenix Suns selected Deandre Ayton out of the University Arizona.

The Suns were 51-21 this season and added playoff series wins over the Los Angeles Lakers, the Denver Nuggets and the Los Angeles Clippers to reach the NBA Finals against the Milwaukee Bucks.

The Bucks survived a six-game series against the Atlanta Hawks despite a leg injury to Giannis Antetokounmpo. It remains to be seen how much Antetokounmpo, a two-time league MVP, will be available and how effective he might be during the finals.

Antetokounmpo was averaging 28.2 points, 12.7 rebounds and 5.2 assists in the playoffs before the injury. He missed the last two games against Atlanta.

But while the Bucks are entering the finals with a decided limp, the Suns are charging at full speed, with Ayton being a top-of-the-list reason why.

The 22-year-old Ayton averaged 18 points and 14 rebounds against the Clippers. On the low post, he likely will be challenged by Milwaukee’s Brook Lopez.

When healthy, the versatile Antetokounmpo plays more like a small forward, as adept on the perimeter as he is in the paint.

In his 13th season out of Stanford University, Lopez, 33, uses his 7-foot, 270-pound mass to clog the lane and make life difficult for the likes of Ayton. He will be the most imposing big man Ayton has faced in the playoffs.

The Suns have been both lucky and good in reaching the finals. In advancing through the playoffs, Phoenix benefited from injuries to the opposition.

The Lakers’ Anthony Davis was limited, as was Denver’s Jamal Murray and the Clippers’ Kawhi Leonard. And now Antetokounmpo is “iffy.”

Another “big man” for the Suns is on the bench. He is second-year Coach Monty Williams, 6-foot-8, a native of Fredericks- burg, Va., and a former standout at the University of Notre Dame and in the NBA.

Williams is seeking to become the first Black head coach to win the NBA title since Tyronn Lue with the Cleveland Cavaliers in 2016. The last before Lue was Boston’s Doc Rivers in 2008.

The very first Black championship coach was Boston’s Bill Russell in 1968. At the time, Russell was the Celtics’ “player-coach.”

In his second season out of Norfolk State University, Dandridge averaged 20 points and 10 rebounds in helping the Bucks to a 4-0 NBA Finals sweep of the Baltimore Bullets.

Milwaukee returned to the finals in 1974, losing in seven games to Boston.

For All The Marbles... NBA Finals