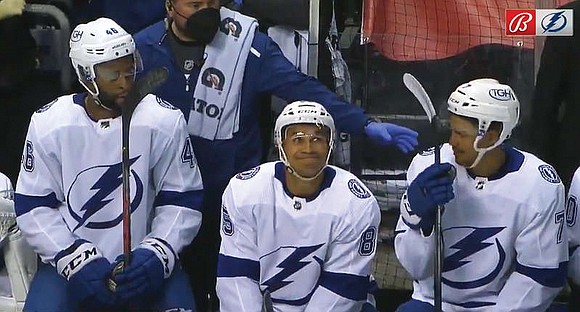 On May 10, the franchise made a different kind of headline—and history—in terms of diversity. That night, the Lightning started an all-Black forward line of Mathieu Joseph, Daniel Walcott and Gemel Smith in the regular season finale against the Florida Panthers in Sunrise, Fla.

It was the first time in NHL history for a team to start an all-Black forward line, although it has occurred in minor league hockey.

“It’s a step in the right direction,” Joseph said to NHL.com. “My goal and the goal of players of color in the league is to showcase the sport to their families or other people of color. It’s great recognition for sure.”

A 24-year-old from Quebec, Joseph played mostly as a right wing during the season.

Left wing Walcott, a 27- year-old native of Quebec, was making his NHL debut.

Lightning Coach Jon Cooper “did something really special here tonight to promote us young guys,” Walcott said. “To step on the ice for my first NHL game—it felt good.”

Playing center forward was Smith, a 27-year-old native of Toronto and older brother of the Detroit Red Wings’ Givani Smith.

The Joseph-Walcott-Smith front line was a one-night occur- rence. The trio did not regularly play together as forwards during the playoffs.

Despite the progress, there were fewer than 50 players of color out of some 700 players on NHL rosters this season.

The NHL’s first Black player was Willie O’Ree, who played with the Boston Bruins during the 1957-58 season.