The U.S. men’s basketball team is headed to the Tokyo Olympics with a chip on its shoulder, but with history on its side.

The U.S. men’s basketball team is headed to the Tokyo Olympics with a chip on its shoulder, but with history on its side.

While the Americans have dominated international hoops for decades, the United States is coming off a humbling seventh-place finish at the 2019 FIBA Basketball World Cup in China.

The United States was eliminated from the 2019 championship with an 89-79 loss to France. The Americans also lost to Serbia before defeating Poland for a far under expectations seventh place.

Spain won the 2019 World Cup, defeating Australia in the final, with France third. The 2020 Olympics were postponed because of the pandemic and moved to this year.

Revenge is in sight for the red, white and blue.

As fate would have it, the U.S. team’s first game in Tokyo will be Sunday, July 25 against those same French players, featuring NBA defensive player of the year Rudy Gobert.

The United States will then play Iran July 28 and the Czech Republic July 31 in Group A at Saitama Super Arena. Pool play will be followed by quarterfinals, semifinals and eventually the finals on Aug. 7. Twelve nations are competing.

Durant, who was the leading scorer in both 2012 and 2016, is seeking to join Carmelo Anthony as only the second American to play on three gold medal teams. Anthony helped win the gold at the 2008, 2012 and 2016 Olympics and was on the bronze medal team in 2004.

Since basketball was introduced into the Olympics in 1936 in Berlin in a rainy outdoors, the Americans have ruled. The United States has won 15 gold medals, one silver and two bronze. No other country is close.

Americans are looking for a fourth straight championship. The team defeated Serbia 96-66 in the finals at the 2016 Olympics in Rio de Janeiro; topped Spain 107-100 in 2012 in the London Olympics; and downed Spain again in the 2008 games in Beijing.

The U.S. team has won six of the last seven Olympics. The exception was a third- place finish in 2004 in Athens.

Uncle Sam’s contingent won the first seven Olympics before losing in the controversial 1972 finals to the Soviet Union in Munich.

Durant is the tallest and oldest — he’s 32 — member of the 2021 contingent. If there is anything missing from this year’s squad, it might be in the rebounding department.

Kevin Love and Draymond Green, both of whom played in 2016, are the only others with Olympic experience.

None of the NBA’s first 11 rebounding leaders from the 2021 season are on Coach Popovich’s roster. Some are foreign citizens, while others chose not to play for personal reasons such as injuries and fear of the coronavirus.

There are no 7-foot players on the U.S. Olympic team this year.

Missing are the two headliners from the Los Angeles Lakers’ 2020 NBA championship.

Superstar LeBron James, MVP of the 2020 NBA Finals, chose not to play but to devote time to The Tune Squad and promoting the new Space Jam movie.

James’ Los Angeles teammate, Anthony Davis, chose not to play due to injury.

Team USA has hit two speed bumps in its Olympic preparations. Competing in Las Vegas exhibition games that started July 10, the team lost to Nigeria 90-87 and to Australia 98-94. The games have no bearing on the team’s Olympic standing. 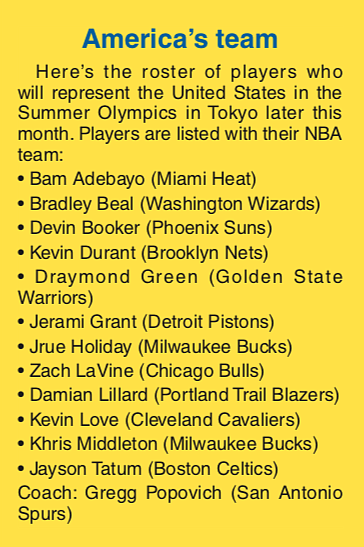