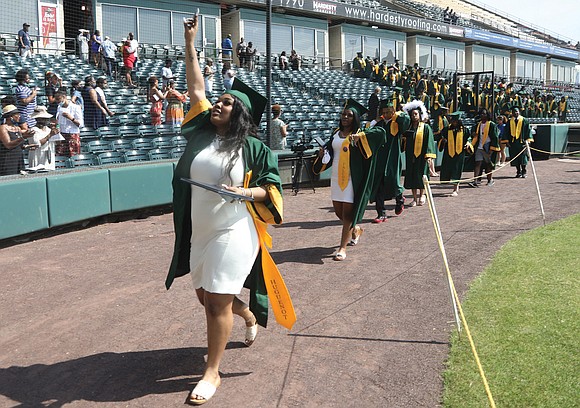 Kym Idella Jeter waves to family and friends in the stands as she walks out with Huguenot High School’s new graduates at the end of Monday morning’s ceremony at The Diamond on Arthur Ashe Boulevard. Huguenot’s was the first of eight Richmond high school commencements over three days at the ballpark. Photo by Regina H. Boone

Huguenot High School’s graduation Monday was a day to remember — the first Richmond Public Schools graduates to walk across a stage and receive their diplomas in a traditional, big group ceremony since the pandemic hit in March 2020.

Hundreds of parents, grandparents, aunties, uncles and friends filled the seats on the promenade and upper deck of The Diamond baseball stadium before 9 a.m., the official start time of the commencement that was held outdoors to minimize the risk to health and safety.

Even with the morning temperature already hitting 80 degrees on its way to 95, the excitement from the crowd was palpable. Seated behind home plate and down the first base line, families cheered as the senior class of Falcons — about 173 strong in green robes and gold stoles — marched into the stadium from right field and down the first base line to take their seats.

The wild roar of applause, screams, whistles and yelling out students’ names was deafening but visibly appreciated not only by the students, but the officials sitting on the stage set up over home plate – RPS Superintendent Jason Kamras, School Board Chairwoman Cheryl L. Burke, board Vice Chairman Jonathan M. Young and Huguenot Principal Robert Gilstrap.

This, the first of eight Richmond high school graduations over three days, was laced with the exuberance of the last game of the World Series and the home team just hitting the winning run.

The city’s metaphorical coaches, starting with Mayor Levar M. Stoney via video, urged the graduating team to take their skills out into the world to make it a better place.

“You have resilience,” Mayor Stoney told the Class of 2021. “You have an invaluable skill in your back pocket.”

He told the graduates more challenges and adversity lie ahead in life that they will have to handle.

That kind of resilience was a theme throughout the program. Mrs. Burke talked about the historical nature of the time culminating in this week’s series of commencements.

“You are historians,” she told the class to the applause of the crowd. “You have survived a pandemic and still you rise,” she said.

Huguenot’s valedictorian Te’Vonya Jeter, who earned a 4.6 GPA and is headed to Howard University in the fall, spoke about the unique academic journey she and her classmates have taken during the past 16 months.

“We survived,” she said in her speech to classmates, noting that she and many others in the class had wanted to drop out. “We finished high school during a worldwide pandemic.

“There were endless deadlines, weird schedules, cameras and on-media microphones and heavy workloads,” she said. “Now it’s time for us to survive adulthood.”

She said the story of the Class of 2021 is one that should be remembered.

After the graduates individually strutted across the stage to receive their diplomas, families punctuated the moment with heartfelt applause.

A casual observer could see perspiration from the hot sun and droplets of pride on the brows of the assembled parents.

Israel Torres, who came to Richmond from Mexico seven years ago, spoke with pride about the accomplishments of his son, graduate Israel Torres Castellanos, especially during a year of virtual learning.

“My son is going to Virginia Commonwealth University’s School of Engineering to become a mechanical engineer,” Mr. Torres said. “That makes me happy.”

He also said he was grateful that graduation could be done in person at The Diamond.