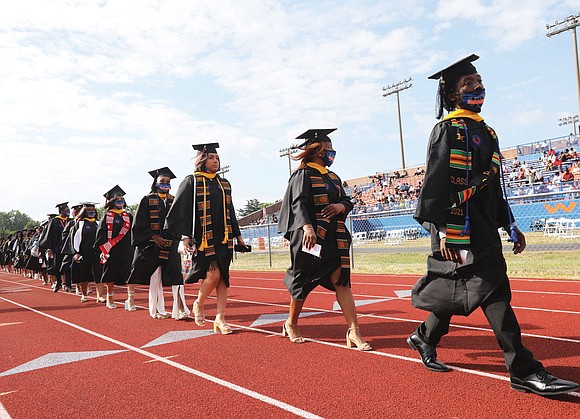 Jamal Meekins, 22, right, a psychology major from Surry County, walks with fellow graduates during the procession Sunday at Virginia State University’s commencement in Rogers Stadium for the classes of 2020 and 2021. Mr. Meekins, who earned his degree this spring, will begin nursing school next week. Photo by Regina H. Boone

It was a day of celebration last Sunday at Virginia State University, as three classes of graduates marched and were recognized during the first in-person commencement held at the university since 2019 because of the pandemic.

The four-hour ceremony, where graduates were seated socially distanced on the stadium’s field and a limited number of guests watched from the stands, recognized a combined 700 graduates who completed their degree requirements in spring 2020, fall 2020 and spring 2021.

Graduates’ families and friends are seated socially distanced in the stadium during Virginia State University’s commencement.

Nearly an hour was focused on students walking individually across the open air stage to receive their degrees and take photos with VSU President Makola M. Abdullah.

“We are leaving behind a legacy for the potential of greatness, a legacy of finding self-love, preservation, perseverance, joy and victory,” said Jeremiah Brooks, president of the Class of 2021 in his remarks.

Commencement speaker Angela Rye, an attorney and political-social commentator, told graduates they are now ready for the draft into the fight for racial equality in this nation, an ongoing battle for progress.

Ms. Rye talked about the many police killings of African-Americans, the assaults on democracy and voting rights and the displays of racism that have dominated and defined much of the past year.

She urged graduates to prepare for their necessary, inevitable part in ensuring future generations of Black people won’t have to fight the same battles against threats to their rights and personhood in a country that she said often has disregarded both since its very founding.

Benjamin Crump, a Florida-based attorney who has represented the families of several people who have been killed at the hands of police across the nation, including George Floyd in Minneapolis, was awarded an honorary degree during the ceremony.