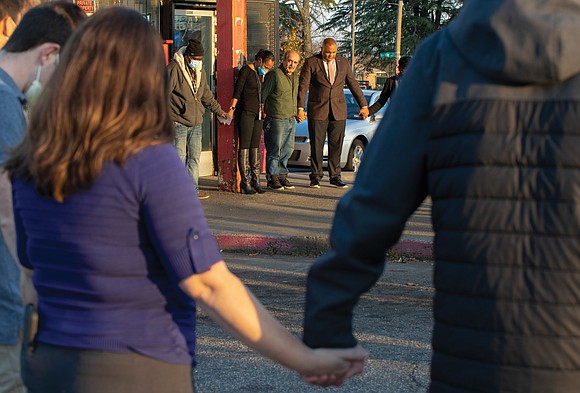 The grandfather of 9-year-old Abdul Bani-Ahmad, center, who was killed with 14-year-old Rahquan Logan in a drive-by shooting last Friday outside the OMG Convenience Store at Nine Mile and Creighton roads in East Richmond, joins hands with Richmond Police Chief Gerald M. Smith, right, and Richmond Police Officer Carol Adams, left, during a prayer vigil Wednesday afternoon outside the store. Pastor Robert Winfree of New Life Deliverance Tabernacle in South Side offered prayers at the vigil, which was organized by the Police Department and attended by many faith leaders and community members. At left, next to Officer Adams, is Robert Jefferson, a regular customer at the store who spoke highly of the grandfather and his kindness to customers. Photo by Julianne Tripp

Richmond leaders and organizations are pressing for proactive, community-focused solutions to halt gun violence in the wake of several shooting deaths and injuries in recent days.

Two juveniles and an 18-year-old were arrested Monday evening in connection with the quadruple shooting Nov. 12 outside of the OMG Convenience Store at Creighton and Nine Mile roads.

Two youngsters, Rahquan “Ompa” Logan, 14, and Abdul Bani-Ahmad, 9, were killed and two adults were injured in the hail of bullets fired from a red Ford SUV.

The U.S. Marshals Service has offered a $5,000 reward for information leading to the arrest of a fourth person, a suspected juvenile, in connection with the case.

“Gun violence leaves everyone traumatized and we must take a stand against violence together,” Chief Smith said in a statement.

“It’s my hope that we get this small amount of individuals who are causing this sort of loss of life in our city and bring them to justice,” said Mayor Levar M. Stoney during his weekly news conference Tuesday at City Hall just hours after Chief Smith announced the arrests.

While city officials push forward with their plans to tackle gun violence, people and organizations also are looking for methods to stem its spread.

“I’m just totally disgusted with all the violence that continues to plague our communities and our neighborhoods,” said James E. “J.J.” Minor III, president of the Richmond Branch NAACP. “We need to make some things happen and address the issue that’s going on.”

Speaking Monday after an emotional conversation with the mother of Rahquan Logan, Mr. Minor’s frustration with the situation and the lack of action was palpable. He offered a range of ideas to resolve what he believes are a wide range of issues leading to these tragedies.

Among the solutions Mr. Minor shared is starting an outreach effort between local interfaith and community groups that would create a network of support for youths and other individuals at risk of committing or becoming victims of gun violence.

Mr. Minor is already at work on this initiative.

“I just want to help save some lives and get some people on the right track,” Mr. Minor said.

Don Coleman, lead pastor of East End Fellowship and a member of RISC, or Richmonders Involved to Strengthen our Communities, reiter- ated RISC’s support of the Gun Vio- lence Intervention program as a way to produce solutions quickly that would best target and resolve the root causes of gun violence in the city.

Lawrence West, leader of Black Lives Matter RVA, also emphasized the importance of proactive interven-tion measures. He cautioned against reactionary measures and moves, such as surveillance, that have the potential for abuse against marginalized communities.

As part of their developing diversionary programs, BLM RVA is planning to build a recording studio in the basement of the Community Church of God in Christ on Park Avenue in The Fan, Mr. West said. At-risk individuals would be able to turn in firearms in exchange for using the studio.

He hopes to form partnerships with the Richmond Police Department and the Richmond Commonwealth’s Attorney’s Office.

“Some of the solutions around mitigating or being proactive against gun violence, or any type of violence, is about creating good spaces,” Mr. West said, “not only in people’s minds, but good spaces where people can go to decompress. There needs to be a full approach toward mitigating gun violence, not just force.”

Several people talked about the need to provide alternatives for those liable to commit or be harmed by violence in the community, while taking care to not worsen present inequalities in affected Richmond communities.

Several community advocates also criticized as ineffective current efforts by the city and the police and stressed the importance of having members of impacted communities involved as a major part in any violence prevention plans or initiatives to better ensure solutions are comprehensive and collaborative.

the table and making sure there are people at the table who are in the communities that are most affected,” Pastor Coleman said.

Following the recent loss of two students at Thomas Jefferson and John Marshall high schools, Greater Rich- mond Stop Child Abuse Now, a mental health partner with Richmond Public Schools, is hosting virtual community conversations focused on healing from trauma. The next one is 7 to 8 p.m. Thursday, Nov. 18. To register, go to https://bit.ly/30BO3dd

“This kind of violence has so many complicated root causes,” RPS Superintendent Jason Kamras said in a statement. “It can make you feel helpless and hopeless. But we must keep striving for solutions. It’s literally a matter of life and death for our students.”