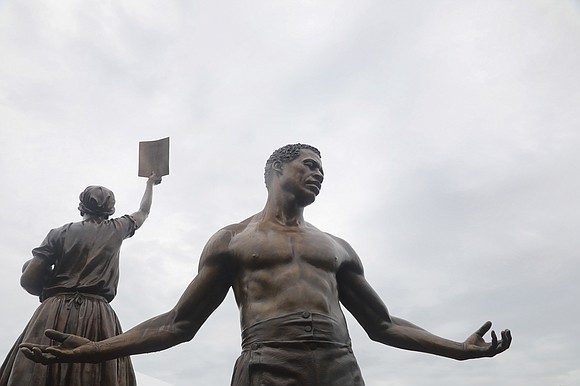 Those were some of the comments from onlookers as they viewed the state’s new “Emancipation and Freedom Monument” that was unveiled Wednesday on Brown’s Island on the James River in Richmond’s Downtown.

Capping an hourlong ceremony, a covering was pulled away, revealing the two, 12-feet-tall bronze figures that Oregon sculptor Thomas J. Warren created to evoke the emotions the newly freed people might have experienced.

One figure, facing east, is that of a woman holding a baby in one arm while the other is raised triumphantly holding a copy of the Emancipation Proclamation, the 1863 edict of President Abraham Lincoln freeing slaves as the Civil War raged.

The second figure, facing west, is of a bare-chested man with whip marks on his back with outstretched arms.

On the base on which the woman stands, there are images and information about 10 Black Virginians, five of whom were involved in the struggle for freedom before the Civil War. They include rebellion leaders Nat Turner and Gabriel and Civil War spy Mary Jane Richards Bowser. The five other Virginians were involved in the fight to end Jim Crow, such as fiery newspaper editor John Mitchell Jr. and the Rev. Wyatt Tee Walker, a late civil rights leader and Chester resident who served as a lieutenant to Dr. Martin Luther King Jr. 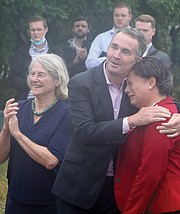 Many in the crowd, including state Sen. Jennifer L. McClellan, head of the statue commission, above, shed tears during the emotional ceremony. Sen. McClellan is comforted by Gov. Ralph S. Northam as Delegate Betsy B. Carr, left, applauds the unveiling.

Several people shed tears during the ceremony, including elected officials.

The ceremony, itself, contained its own symbolism of resilience and perseverance. It began in a downpour of rain, with gloomy skies overhead, and ended with the sun beginning to peak through the clouds as the cloth was pulled off the statues.

The unveiling of this powerful new symbol of racial justice came just two weeks after the largest state-owned symbol of white supremacy and Black oppression — a state-owned statue of slavery-defending Confederate Gen. Robert E. Lee — was taken down from Monument Avenue.

Gov. Ralph S. Northam, who ordered the removal of the Lee statue and engaged in an extended court battle to make that happen, called the new Emancipation and Freedom Monument a symbol of Virginia that “is reckoning with the ugliness and inequality of its past, a Virginia that has taken a deep, hard look at what we need to do better and how we can build a better future together.”

The monument’s creation was spearheaded by the Dr. Martin Luther King Jr. Memorial Commission, a state group comprised of 10 members of the General Assembly and eight citizens. Richmond state Sen. Jennifer L. McClellan has chaired the group for seven years.

The monument was designed by Thomas Jay Warren of Oregon and shows a man, woman and child newly emancipated from enslavement. The man’s back is lined with scars from whipping and the woman is holding aloft a copy of the Emancipation Proclamation. The base contains the names and brief descriptions of 10 Virginians who contributed to the fight for freedom and equality before and after emancipation. They are slave rebellion leaders Gabriel and Nat Turner; Dred Scott, whose unsuccessful lawsuit for his freedom led to the 1857 U.S. Supreme Court decision declaring that people of African descent had no rights under the U.S. Constitution; William Harvey Carney, who fought with the Massachusetts 54th Infantry Regiment of the U.S. Colored Troops and was the first African-American to receive the Congressional Medal of Honor; and Mary Jane Richards Bowser, a spy in the Confederate White House in Richmond who provided useful information to Union officials. Also, the Rev. Wyatt Tee Walker, co-founder of the Southern Christian Leadership Conference and chief of staff to Dr. Martin Luther King Jr.; John Mercer Langston, Virginia’s first African-American representative in Congress; Lucy Simms, an teacher who advocated for universal education; John Mitchell Jr., the fiery newspaper editor of The Richmond Planet who led a boycott of Richmond’s segregated trolley system and was the first African-American to run for governor of Virginia; and Rosa Dixon Bowser, educator and women’s rights activist who founded the first African-American teachers association in Virginia and the Virginia State Federation of Colored Women’s Clubs.

Before the ceremony, Sen. McClellan, who is credited with taking on much of the work to ensure the monument got done, said she felt like she had “birthed another child with all the labor pains and joy that comes with it.”

The program opened with Janine Bell of the Elegba Folklore Society performing a ritual African libation ceremony in honor of ancestors. The ceremony was punctuated with speeches, a solo of the song “Glory” by Dr. Janet Copeland and the choral music of the Rev. Donté McCutcheon and The Levitical Priests.

Mayor Levar M. Stoney joined in welcoming the Emancipation and Freedom Monument to the city.

“Richmond and Virginia have come a long way. And while there is still much to do,” he said, the monument shows “we are moving in the right direction. We are moving forward to a more inclusive and more equitable future.”

“This monument stands on its own, but it does not stand alone,” Mayor Stoney said. “It sends a powerful message to the rest of the world about our values — new Virginia values — that have been informed by the pain and by the suffer- ing and righteous struggles of the people represented on the monument.”

Richmond Delegate Delores L. McQuinn, vice chair of the MLK commission, said, “In many ways, we are turning the page” in putting up a monument that recalls both “the tragedy and unyielding system” that enslaved people lived under and “also the triumph of a people.”

Along with honoring people “whose actions and resistance led them to the front lines of the fight for equal rights,” Delegate McQuinn said that the arrival of the statue shows the continuing effort to eliminate “systemic ideologies” that have undergirded oppression. She said her hope is that young people will come to view the statue and learn more about those who sought to create freedom for them.

Sen. McClellan said the statue reflects resilience and perseverance of the people who were oppressed but continued “to push on” despite setbacks. The development of the monument is not an end point, she said, but an inspiration to continue “to push on until the words life, liberty and pursuit of happiness apply to all.”

The sculptor was unable to attend because of health reasons, Sen. McClellan said. Also missing was the person who sparked the idea of the monument, former Richmond state Sen. Henry L. Marsh III, a noted civil rights attorney who served as Richmond’s first Black mayor in the 1970s. Mr. Marsh is a former chair of the commission.

In 2012, he came up with the idea for a monument to help mark the 150th anniversary of the Emancipation Proclamation. He won support from the General Assembly for the MLK Commission to take on the project, along with $500,000 in seed money to help secure design.

Sen. McClellan took over as chair in 2014 after Sen. Marsh resigned to become a state Alcoholic Beverage Control commissioner. He has since retired.

Along with working with the city and other partners to secure the site for the statue, Sen. McClellan also pushed the fundraising. She said more than $1 million was raised to cover the cost, primarily from area corporations, banks and individuals.

The initial plan had been to have the statue ready in 2019 in time for the 400th anniversary of the arrival of the first enslaved Africans in Virginia. But Sen. McClellan thinks the delay has been positive. She called it appropriate for the statue to make its entry in the wake of the upheaval from the pandemic and the global racial justice demonstrations sparked by the May 2020 police killing of George Floyd in Minneapolis.

Sen. McClellan dismissed concerns that the artwork would only be visible to those who deliberately go to Brown’s Island. She said the commission considered other sites, including one on Monument Avenue. In the end, she said, the preference was for a more intimate location that was away from traffic.

“We wanted people, especially children, to be able to come and reflect and interact with the monument,” Sen. McClellan said. “On Monument Avenue, you can’t do that.”