R&B superstar R. Kelly faces up to life in prison after being convicted Monday on the testimony and strength of Black women who would not let the justice system forget what happened 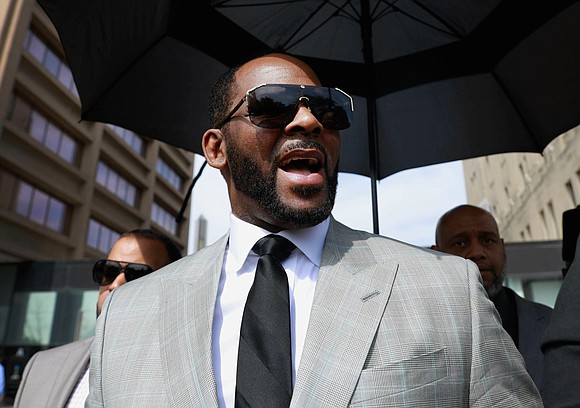 In this file photo, R. Kelly leaves the Leighton Criminal Court building in Chicago on June 6, 2019. Accusers and others demanding accountability for the R&B superstar over allegations that he was abusing young women and girls for decades say it took so long to get to a guilty verdict in part because his targets were Black. R. Kelly was convicted Monday, Sept. 27, 2021, in his sex trafficking trial in federal court in New York. Photo by Amr Alfiky/Associated Press file photo

For years, decades even, allegations swirled that R&B superstar R. Kelly was abusing young women and girls, with seeming impunity.

They were mostly young Black women. And Black girls.

And that, say accusers and others who have called for him to face accountability, is part of what took the wheels of the criminal justice system so long to turn, finally leading to his conviction Monday in his sex trafficking trial. That it did at all, they say, is also due to the efforts of Black women, unwilling to be forgotten.

Speaking out against sexual assault and violence is fraught for anyone who attempts it. Those who work in the field say the hurdles facing Black women and girls are raised even higher by a society that hyper-sexualizes them from a young age, stereotyping them as promiscuous and judging their physiques, and in a country with a history of racism and sexism that has long denied their autonomy over their own bodies.

“Black women have been in this country for a long time and ... our bodies were never ours to begin with,” said Kalimah Johnson, executive director of the SASHA Center in Detroit, which provides services to sexual assault survivors.

“No one allows us to be something worthy of protection, a human that needs love, and sacredness,” Ms. Johnson said. It’s as if, “there’s nothing sacred about a Black woman’s body.”

A jury of seven men and five women found R. Kelly, 54, guilty of all nine counts, including racketeering, on their second day of deliberations. R. Kelly wore a face mask below black-rimmed glasses, remaining motionless with eyes downcast, as the verdict was read in federal court in Brooklyn, N.Y.

Prosecutors alleged that the entourage of managers and aides who helped R. Kelly meet girls—and keep them obedient and quiet— amounted to a criminal enterprise. Two people have been charged with R. Kelly in a separate federal case pending in Chicago.

He faces the possibility of decades in prison for crimes including violating the Mann Act, an anti-sex trafficking law that prohibits taking anyone across state lines “for any immoral purpose.” Sentencing is scheduled for May 4.

One of R. Kelly’s lawyers, Deveraux Cannick, said he was disappointed and hoped to appeal.

“I think I’m even more disappointed the government brought the case in the first place, given all the inconsistencies,” Mr. Cannick said.

Several accusers testified in lurid detail during the trial, alleging that R. Kelly subjected them to perverse and sadistic whims when they were underage.

For years, the public and news media seemed to be more amused than horrified by allegations of inappropriate re- lationships with minors, starting with his illegal marriage to the R&B phenom Aaliyah in 1994 when she was just 15.

His records and concert tickets kept selling. Other artists continued to record his songs, even after he was arrested in 2002 and accused of making a recording of himself sexually abusing and urinating on a 14-year-old girl.

Widespread public condemnation didn’t come until a widely watched documentary series, “Surviving R. Kelly,” helped make his case a signifier of the #MeToo era, and gave voice to accusers who wondered if their stories were previously ignored because they were Black women.

“To the victims in this case, your voices were heard and justice was finally served,” Acting U.S. Attorney Jacquelyn Kasulis said Monday.

At the trial, several of R. Kelly’s accusers testified without using their real names to protect their privacy. Jurors were shown homemade videos of R. Kelly engaging in sex acts that prosecutors said were not consensual.

The defense labeled the accusers “groupies” and “stalkers.”

Mr. Cannick, R. Kelly’s lawyer, questioned why women stayed in relationships with him if they thought they were being exploited.

“You made a choice,” Mr. Cannick told one woman who testified, adding, “You participated of your own will.”

In a 2017 study from the Georgetown Law Center on Poverty and Inequality, adults were asked about their perceptions of Black girls in comparison with white girls of the same age in terms of their needs for nurturing and protection, as well as their knowledge of adult topics like sex.

“We don’t value Black girls, and they are dehumanized, and they are also blamed for the sexual violence that they experienced to a greater extent than white girls are,” said Rebecca Epstein, executive director of the center and one of the study’s authors.

For years, girls suffering at R. Kelly’s hands were treated as more of a punchline than a travesty, even during a trial on child pornography charges where a video, allegedly of him abusing a girl, was shown. He was acquitted in 2008. Lisa Van Allen, who testified against R. Kelly in 2008, told ABC’s “Good Morning America” in an interview broadcast Tuesday that she “almost cried” when she learned of Monday’s verdict. “You know, this is what I was looking for back in 2008,” Ms.Van Allen said. “So I would say that the difference this time around is that there’s power in numbers. A lot of people came forward.”