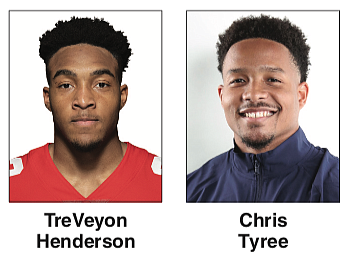 TreVeyon Henderson and Chris Tyree are each on the Doak Walker Watch List. The annual Walker award goes to the nation’s premier ball carrier.

Henderson, out of Hopewell High School, is entering his sophomore season at Ohio State University.

Tyree starred at Thomas Dale High in Chester before enrolling at Notre Dame University, where he is a rising junior.

Henderson was arguably the nation’s top freshman a year ago, rushing for 1,248 yards and 15 Buckeyes’ touchdowns. He averaged 6.8 yards per tote.

Tyree accumulated 827 all-purpose yards for the Fighting Irish as a rusher, receiver and kick returner. He had 115 receiving yards against Oklahoma State, and returned a kickoff 96 yards for a TD against Wisconsin.

Playing for powerful programs at Ohio State and Notre Dame, Henderson and Tyree likely will receive the kind of media attention necessary to capture high honors.

The two headliners will be going head-to-head Sept. 3 when Notre Dame travels to Columbus to face OSU on national TV.

Last year’s Walker recipient was Michigan State’s Kenneth Walker (no relation to Doak), now a rookie with the Seattle Seahawks.

Doak Walker was a three-time All-America back at Southern Methodist University in the 1940s. He went on to NFL fame with Detroit.