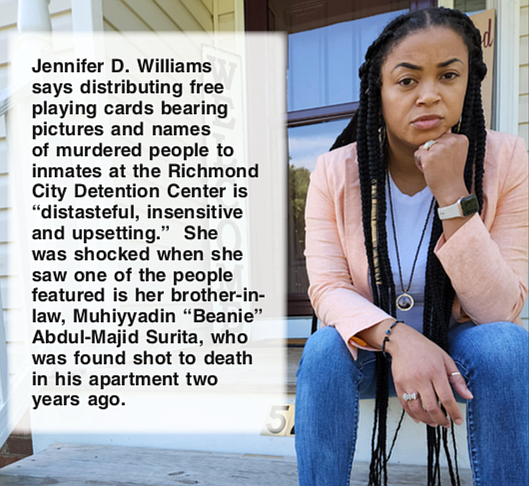 Sheriff Antionette V. Irving, who has been under fire for her jail management and attacks on deputies, has sought to shift the narrative.

She did so by announcing she has begun helping Richmond Police get new leads in unsolved homicide cases.

Her method: Distribution of free decks of playing cards bearing the pictures, names and locations of crime scenes for 52 murdered people to inmates at the Richmond Justice Center.

The distribution began last week and is the first use in the metropolitan area of an approach that has become increasingly popular in the corrections field.

Though considered a long shot, the sheriff said the hope is that the pictures would trigger memories and generate some calls to a tip line — as has happened occasionally in other states. 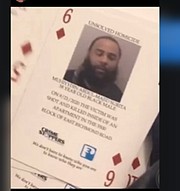 But some families of the victims are pushing back — criticizing the sheriff and her partner agencies for failing to consult them or give them any notice that their loved ones would be featured.

“This is distasteful, insensitive and upsetting,” said social worker Jennifer D. Williams, who has become a leader in criticizing the playing cards.

She began speaking out after someone sent her a video that a Richmond inmate posted on Instagram showing the cards. She was shocked when she saw one of the people featured is her brother-in-law, Muhiyyadin “Beanie” Abdul-Majid Surita.

A happy, outgoing father of two young girls who was known for his musicianship and rapping performances, Mr. Surita was found shot to death in his apartment in the 3500 block of East Richmond Road on Sept. 21, 2020.

Police determined that around 3 p.m., someone kicked in the door of the unit in the Oakwood community and killed him as he slept after a night of partying to celebrate his 38th birthday the day before.

“I understand what they are trying to do,” Ms. Williams said. “But our feelings are still raw from our loss. He was a wonderful person. We have no idea why anyone would shoot him. We want his case solved, but this is not the way to go.”

She said that those involved with the production of the cards “should have prepared us. They should have sat down with us. At the very least, we deserved a heads-up. We got nothing. And that hurts. It shows a lack of empathy for the families and their feelings.”

Ms. Williams said she is sure that some, and perhaps most, families would have agreed to participate if someone had met with them in advance, especially since all other leads have been exhausted.

“But if others did not want to, there is no shortage of victims whose pictures could have been used,” she said.

Such advance consultation is recommended by the National Sheriffs’ Association, which has created model policies for members as the playing card idea has spread.

Sheriff Irving, in an email response to a Free Press request for comment, stated Richmond Police had the responsibility for contacting families of victims.

The RPD “has the very difficult task of investigating crimes and staying in contact with victims’ families,” Major Stacey M. Bagby stated on behalf of the sheriff. “Our goal is to assist detectives with some of their most challenging or puzzling cases.

“As for the playing cards,” she continued, “we did not hesitate to work with RPD and its dedicated team of detectives. These detectives have been working on these challenging cases and have a rapport with the victim’s family members.

“The distribution of the cards by the Sheriff’s Office,” she stated, “is a step toward achieving justice for the victims of these crimes and their family members.”

She also noted that RPD meets with family members on the first Wednesday of every month at the Richmond Police Training Academy in conjunction with the Commonwealth Attorney’s Office and its Victim/Witness Services Program. The Sheriff’s

Office does not participate in these support group meetings for victims’ relatives.”

Ms. Williams said that she has reached out to Richmond Police and received a call from John Hayes Jr., deputy chief of patrol operations.

Ms. Williams said the deputy chief was apologetic and offered to set up a meeting with her and other families who might object. The meeting is to take place Friday, she said, and is to also include the police chief, a representative from the Mayor’s Office and others involved with the cards.

The deputy chief did not respond to a Free Press request for comment.

Credit for the idea of putting victims’ photos on playing cards has gone to Tommy Ray, a special agent with the Florida Department of Law Enforcement. The first distribution was in Florida prisons in 2007, and that reportedly led to new leads in at least three cases in the first year.

No one has tracked results, but currently decks of cards with the faces of victims are being distributed in the prisons and jails of 18 states. Connecticut has reported gaining new leads in 20 open cases after distributing multiple decks of cards.