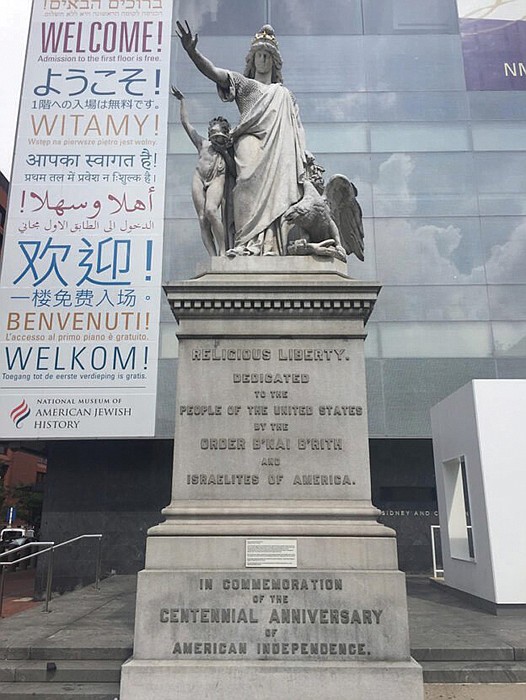 Last summer, Princeton University agreed to organize an exhibit of works by American Jewish artists in the second half of the 19th century.

The exhibit would feature 50 pieces, including a life-size marble sculpture called “Faith” by the most renowned Jew- ish American sculptor of the period, Moses Jacob Ezekiel (1844-1917).

In July, the university flew in an art historian to tour the Ellen and Leonard Milberg Gallery in the Firestone Library and signed a contract to have that historian curate the exhibit, which was set to open in September. The exhibit, funded by Leonard Milberg, also would highlight a new collection of essays about American Jews in the Gilded Age published by Princeton University Press.

But by the fall, problems began to emerge, and by Dec. 14, the show was canceled.

At least two of the artists featured in the show served in the Confederate Army.

Mr. Ezekiel, probably best known for his 32-foot Confederate Memorial at Arlington National Cemetery, was unrepentant in his devotion to the Lost Cause. He was known for hanging the rebel flag in his studio four decades after the war.

The other, painter Theodore Moise, attained the rank of major in the Confederate Army.

Now, some Jewish scholars are calling out Princeton, saying that the works chosen for the exhibit did not relate to the Confederacy and that by canceling the show, the university was in effect censoring the works.

“One approach is that we have faith in the audience; we display in full complexity the material and talk about it,” said Dr. Jonathan D. Sarna, professor of American Jewish History at Brandeis University. “The other approach is that we cancel it. I’m very reluctant to be part of the woke, cancel everything that doesn’t conform to present-day moral standards.”

Dr. Sarna is co-editor of the book of essays tentatively titled “Jews in Gilded Age America” that inspired the exhibit. The book, co-edited with historian Adam Mendelsohn, is expected to be published this year.

Neither Dr. Sarna nor the show’s curator, Dr. Samantha Baskind, a professor of art history at Cleveland State University, denies that two of the most important artists of the period were Southern Jews who abetted the Confederate cause.

Dr. Baskind, who is writing a book on Mr. Ezekiel, said the artists’ views on the Confederacy are offensive but must be studied and put in context.

“I’m not romanticizing Ezekiel, but his legacy is important,” Dr. Baskind said.

“We still need to talk about the good and the bad. To erase those complications is against everything the academy stands for.”

Spurred by the massive racial justice protests of 2020, America has faced a racial reckoning and reappraisal of the legacy of the Confederacy. In 2021, 73 Confederate memorials were renamed, removed or relocated from public spaces, according to a new report from the Southern Poverty Law Center. There were 157 Confederate memorials removed in 2020 in the wake of George Floyd’s murder by Minneapolis Police.

Universities, too, are in the midst of a wholesale effort to address ties to slavery and the Confederacy. Princeton removed Woodrow Wilson’s name from the School of Public and International Affairs as well as a residential college in 2020, saying the 28th president’s racist policies made him an inappropriate namesake.

Last year, Princeton published its first annual report highlighting diversity, equity and inclusion work across campus. It formed a committee to come up with principles for naming, renaming and changing campus iconography. The university also has pledged to increase the number of underrepresented tenured and tenure-track faculty members by 50 percent within five years.

Universities also have faced criticism that, in their zeal to combat racism, they also are trampling over academic discourse and inhibiting discussion of unpopular positions or ideas.

Plans for the art exhibit came about through the support of financier and Princeton benefactor Leonard Milberg who read a 12,000-word essay written by Dr. Baskind, which inspired him to propose an exhibit.

Dr. Baskind, who spent hours selecting works for the exhibit, said the idea was to “showcase the diversity of the contributions of Jewish American artists in the 19th century,” about which very little scholarly work has been published.

The centerpiece was to be Mr. Ekeziel’s “Faith,” a 64- inch marble sculpture of a boy grasping a flaming lamp in one hand as he raises his other hand to the heavens. 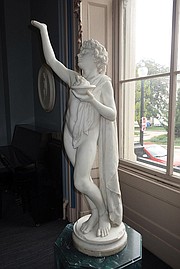 “Faith” is a sculpture by Moses Jacob Ezekiel from 1877.

“Faith” is a copy of a larger 1876 monument called “Religious Liberty” that stands outside the National Museum of American Jewish History on Independence Mall in Philadelphia. The work was commissioned by the Jewish fraternal order B’nai B’rith to celebrate the 100th anniversary of the signing of the Declaration of Independence. In the larger monument, Mr. Ezekiel portrayed Liberty as a woman in a toga extending her right arm over the boy Faith, in an allegorical gesture of protection. 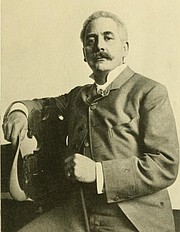 The monument, like the works of other Jewish artists of the time, celebrated Jewish American patriotism and pride rather than any parochial Jewish religious interests.

The exhibit was also to include an Ezekiel bust of Isaac Mayer Wise, the 19th-century rabbi considered the father of Reform Judaism in the United States, as well as Mr. Ekeziel’s sculpture of President Abraham Lincoln.

“His ties to the Confederacy are only one aspect of his multidimensional life as an artist,” Dr. Baskind said of Mr. Ezekiel.

But emails with university officials, including University Librarian Anne Jarvis, reveal larger concerns. Library officials referenced meetings with the vice provost for institutional equity and diversity on Oct. 5 and soon thereafter there were phone call discussions of substituting artists from a later period with no Confederate ties.

“After extensive discussion, the library and supporters of the potential exhibition were unable to agree on its final composition,” Mr. Chang, the spokesperson said.

Some historians supported the decision and said it was consistent with the university’s desire to offer fresh scrutiny of the past.

“Princeton was a place where slave owners sent their sons,” said Dr. Anthea Butler, a University of Pennsylvania religion scholar. “Given Princeton’s history, I can understand why they were a little skittish about this.”

Dr. William Sturkey, a historian at the University of North Carolina at Chapel Hill who specializes in the history of race, said the university’s sensitivity is wholly warranted.