‘I’m tired of fighting people who look like me’

Lt. Gov.-elect Winsome Sears rails against criticism she said is leveled against her by the Black community 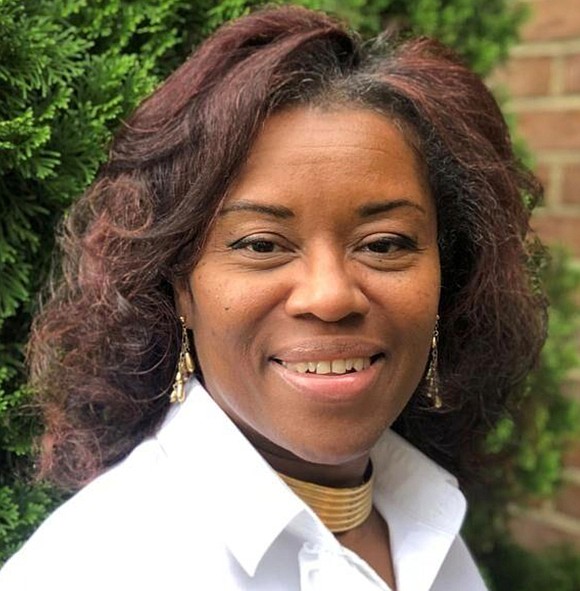 Just days before Winsome Sears’ historic swearing in Saturday, Jan. 15, as Virginia’s first female lieutenant governor and the first Black woman elected to statewide office in the Commonwealth, she sounds more like a woman under siege than someone poised to enter the history books.

In a 40-minute Zoom interview Jan. 6 with the Richmond Free Press, the 57-year-old Marine Corps veteran and Winchester area businesswoman who served two years in the House of Delegates two decades ago said she is under attack by a biased media, Democrats and many in the African-American community for stands she has taken on polarizing issues.

Asked what media she was referring to, the lieutenant governor-elect responded, “Hollywood ...The alphabets – ABC, NBC, CBS, all of them.”

Ms. Sears, a Republican, campaigned on a conservative platform of “choice” in education, tax cuts, attacks on critical race theory and gun rights. She came under fire for an image her campaign circulated in mailers and on social media of her holding a military-style assault weapon. Some critics called it “wacko.”

Ms. Sears’ victory last November came as a surprise to many. She beat out five others — including a current and a former member of the state legislature who both had bigger war chests — to win the Republican Party’s nomination for lieutenant governor. And then she went on to defeat Democratic Delegate Hala Ayala — also a woman of color — in November’s general election by about 50,000 votes.

A native of Kingston, Jamaica, who immigrated to the United States with her family at age 6, Ms. Sears called herself “a walking impossibility” on the campaign trail, telling audiences that education lifted her and her family out of poverty.

In last week’s interview, Ms. Sears talked about how she has been “training” for her new job as lieutenant governor presiding over the state Senate by boning up on Senate rules and parliamentary procedure.

“My goal, first and foremost, is to do the job of the lieutenant governor well,” she said.

During the interview, she reiterated her support for repealing the state tax on groceries, suspending an increase in the gas tax, creating charter schools and making public money available to parents to send their children to private schools.

“Why is it that you can’t allow the parent to decide where the child should go? Why does the money have to go to that brick building?” Ms. Sears said.

She is a staunch supporter of former President Trump, who is accused of orchestrating the Jan. 6, 2021, insurrection at the U.S. Capitol by a mob of his backers to try to block the certification of the election of Democrat Joe Biden as president. Ms. Sears had served as chairperson of Black Americans to Re-Elect the President, a political action committee to aid Mr. Trump.

Asked on the first anniversary about the violent and deadly Capitol attack, Ms. Sears said, “This was uncalled for. This is not what we do in America. They may do it in other countries, but not in America. We believe in the peaceful transition of power.”

Asked about the former president still not conceding defeat in the 2020 presidential election, Ms. Sears said, “You’ve got to talk to the president,” referring to Mr. Trump. “I am responsible for my sins and other people are responsible for theirs.”

As clear as she is on some issues, Ms. Sears offers ambiguous responses when asked about other issues, including COVID-19 mask and vaccination policies.

In a post-election interview with CNN, Ms. Sears questioned whether masks really do protect people against transmission of the coronavirus and suggested that those who have been infected with COVID-19 don’t need to get the vaccine. She also declined to reveal her vaccination status, saying it would open her to being asked about her “DNA” and medical history.

In her interview with the Free Press, Ms. Sears spoke about vaccination as a personal choice rather than a matter of public health policy despite the virus having claimed the lives of nearly 16,000 Virginians and more than 836,000 Americans.

During the interview, she both embraced and sought to distance herself from Gov.-elect Glenn A. Youngkin, a fellow Republican and political neophyte who was endorsed by former President Trump during the campaign. As lieutenant governor, Ms. Sears will be first in the line of succession, according to the Virginia Constitution, in the event the governor is removed from office or is disqualified, dies or resigns.

When asked about potential changes to Virginia’s COVID-19 mask mandate and vaccination policies, she replied, “I am not the Youngkin administration. I was elected separately.”

Like Gov.-elect Youngkin, Ms. Sears has repeated the false claim that critical race theory is taught in Virginia’s public schools.

CRT is an area of scholarship that examines the impact of systemic racism on American laws and institutions. It is taught in some universities, but not in K-12 curricula.

“We are framing too many issues in terms of race,” Ms. Sears said during a previous FOX News interview. She has used the national controversy over critical race theory to attack what she calls “lies” about American history being taught in public schools.

But in a discussion on CNN about the 1921 Tulsa race massacre in which white mobs went on a rampage, attacking and killing as many as 300 Black residents and burning down blocks of their homes and businesses in Tulsa’s Greenwood section, Ms. Sears offered the riot as an example of African-American advancement.

“Let’s ask ourselves how did the Black people amass so much wealth right after the Civil War so that it could even be destroyed?” Ms. Sears said.

When asked about this in the Free Press interview, Ms. Sears said that schools should “teach all of it,” but then immediately changed the topic to what she called Marxism.

“Marxism has never helped anybody. It sounds good initially—that everybody’s going to share and share alike—but it doesn’t work that way.”

Ms. Sears reacts strongly to criticism of her politics and positions, particularly when it comes from members of the African-American community who she feels don’t support her.

During a recent appearance on Joy Reid’s show, “The ReidOut” on MSNBC, Georgetown University professor and scholar Dr. Michael Eric Dyson said Ms. Sears is a tool of white supremacists.

In 2002 as a member of the House of Delegates representing Norfolk, Ms. Sears sponsored legislation amending Virginia’s cross-burning statute to make it a felony to burn any type of object on public property or on the private property of another person with the intent to intimidate.

The state’s previous law had been struck down by the Virginia Supreme Court as unconstitutional because it singled out burning a Christian cross.

Ms. Sears’ measure was passed by the GeneralAssembly and signed into law by then-Gov. Mark R. Warner, a Democrat.

“I am the one who’s fighting, fighting for people who look like me and the underprivileged,” Ms. Sears told the Free Press, adding that she was then on her way to a state correctional center in Chesapeake.

“I am the one who every Wednesday, six o’clock, brought the message of hope to men in detention centers,” she continued. “I am the one who’s been in homeless shelters, ran it for women and their children and had to put the babies behind me so when their mothers were being arrested, they wouldn’t see that and it wouldn’t sear in their brains that their mother was going to jail. And I’m tired. I’m tired. I’m tired.

“I’m tired of fighting people who look like me,” she said, as she ended the interview.