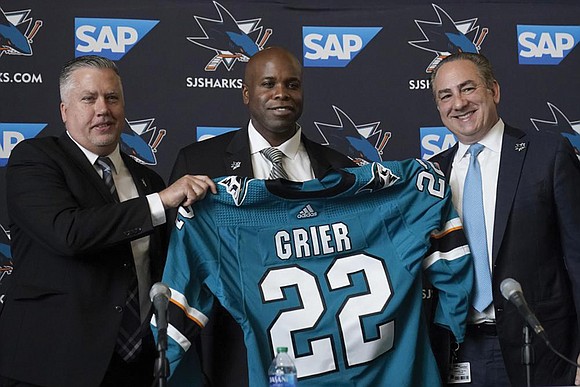 Mike Grier, middle, poses for photos Tuesday as he is introduced as the new general manager of the San Jose Sharks between assistant general manager Joe Will, left, and president Jonathan Becher at a news conference in San Jose, Calif. Photo by Jeff Chiu/Associated Press

“It means a lot to me,” Grier said at his introductory news conference Tuesday. “It’s not something I take lightly. I realize there’s a responsibility that comes with the territory. But I’m up for it. How I carry myself and how this organization carries itself, I think we’ll do well and hopefully we’ll leave a footprint and open some doors for people to follow.”

Grier fills the spot that opened when Doug Wilson stepped away for health reasons on April 7. Wilson had taken a leave of absence in November with Joe Will serving in the interim role since then.

Team President Jonathan Becher said Grier emerged from a pool of dozens of candidates because of his experience as a player, scout, coach and executive over the last few decades and his commitment to building a winning culture in San Jose.

But he acknowledged the history-making nature of the hire as well.

“I hope you do serve as an inspiration to lots of people and that I hope you’re the first and certainly not the last,” Becher told Grier. Grier spent three of his 14 seasons in the NHL with the Sharks from 2006 to 2009.

He retired in 2011 after playing 1,060 career games, and has spent time as a scout in Chicago, an assistant coach in New Jersey and most recently the hockey operations adviser for the New York Rangers, where he was given many of the responsibilities of an assistant general manager.

The hire comes less than a week after Will announced that head coach Bob Boughner and three of his assistants wouldn’t return next season. Will said he made the move two months after the season ended to give the new general manager a clean slate.

Grier has a tough task in San Jose in trying to rebuild a team that has missed the playoffs three straight seasons for the first time in franchise history.

Grier will have to get to work quickly, dealing with the draft Thursday and Friday, the start of free agency next week and the need to hire a coaching staff and build up the front office.

Grier said the draft and free agency are the immediate priorities as well as trying to create more salary cap flexibility if possible before he turns to the coaching search.

“I just think that’s a challenge to try to get everything in order as quickly as possible, but still doing it the right way and being thorough,” he said. “It’s all a challenge but everything I’m looking forward to.”

Grier said he’s not interested in tearing the team down and doing a complete rebuild but acknowledged taking one step back to move forward may be necessary.

San Jose has many high-priced veterans on the roster and could look to either trade defensemen Brent Burns or Erik Karlsson or buy out defense- man Marc-Edouard Vlasic to create more flexibility.

“It’s definitely a balance,” Grier said. “I don’t want to get ahead of myself and be the kid in a candy store and be like ‘I can go get this. I can go get that.’ We’ve got to stay patient and stick with the vision that we believe in and not rush things. I think we’ll set a path and stay the course and not rush anything and get ahead of ourselves and end up digging a hole that we can’t get out of in the future.”

Grier comes from a family of suc- cessful sports executives. His brother, Chris, serves as general manager of the NFL’s Miami Dolphins, and his father, Bobby, served as a longtime coach and front office executive for the New England Patriots and Hous- ton Texans.

Grier said he’s been preparing for this new role since he was about 10 years old in discussions he had with his brother and father.

The NHL has been stressing diversity with several women also getting opportunities in front office positions and on coaching staffs.

The Arizona Coyotes announced Tuesday that Kelsey Koelzer and Kori Cheverie will serve as coaches under head coach André Tourigny during the team’s development program next week.