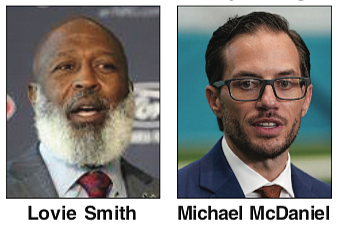 Sometimes, it seems, the more things change the more they stay the same.

Lovie Smith and Michael McDaniel were hired by the Houston Texans and the Miami Dolphins, respectively, after coaches Brian Flores of Miami and David Culley of Houston were fired.

Smith and McDaniel will join longtime head Coach Mike Tomlin of the Pittsburgh Steelers as the only three Black head coaches in the 32-franchise NFL. About 70 percent of the players in the NFL are Black.

Coach Tomlin has been the Steelers’ head coach since 2007.

Meanwhile, Coach Flores, who filed a class action lawsuit against the NFL, the Dolphins, the Denver Broncos and the New York Giants organizations on Feb. 1, alleging racial discrimination in hiring, has been signed as the senior defensive assistant/linebackers coach for the Pitts- burgh Steelers.

Smith spent the past season as an associate head coach, under Culley, with Houston during a dreary 4-13 campaign.

McDaniel, who has a white mother and Black father, prefers the label “interracial” or “biracial.” Traditionally, a person of mixed Black and white ancestry is considered Black by the NFL.

A 38-year-old native of Aurora, Colo., McDaniel is a Yale graduate and accomplished violinist. He had previous NFL coaching stops with Cleveland, Atlanta, Denver and Washington before becoming the San Francisco 49ers’ offensive coordinator a year ago.

In another category, the NFL lists Washington Commanders Coach Ron Rivera, who is Hispanic, and New York Jets Coach Robert Saleh, who is of Lebanese ancestry, as “minority” coaches.

Flores’ lawsuit against the NFL and the lack of Black head coaches has been a main topic in recent weeks. His suit claims that text messages Flores received from New England Patriots Coach Bill Belichick showed the New York Giants planned to hire Brian Daboll as the new head coach before interviewing any minority candidate as required by the Rooney Rule.

Flores also alleged in the suit that Dolphins team owner Stephen Ross asked him to “tank,” or deliberately lose games, and offered him $100,000 per loss to help assure the Dolphins had a higher draft pick.

Speaking recently at the Super Bowl in Inglewood, Calif., NFL Commissioner Roger Goodell said the league “must improve its diversity record,” but offered no specific solutions.

Under the Rooney Rule, NFL teams now are required to interview two minority candidates for an opening. Previously, it was one.