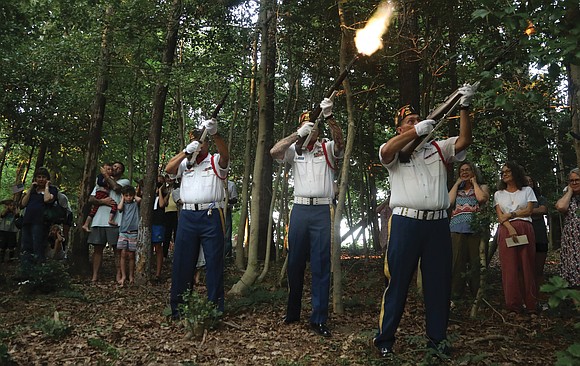 Members of the Veterans of Foreign Wars Post 9808 in Mechanicsville lead a three-volley salute during a twilight memorial ceremony July 28 held at the Sons and Daughters of Ham Cemetery near Bandy Field in Henrico County. The ceremony, held on National Buffalo Soldiers Day, honored Moses Bradford Jr., a Buffalo Soldier who served in the 25th Infantry during the Spanish-American War. He is buried in the cemetery. Photo by Regina H. Boone

The Rev. Jeannette Brown, an associate minister at Westwood Baptist Church, will conduct the 7 p.m. public ceremony at the burial ground that the post-Civil War fraternal group established in the mid-1870s.

The event also includes a wreath-laying ceremony honoring Private Moses Bradford Jr., a Buffalo soldier who is buried in the cemetery.

A member of the Bradford family that once owned what is now Bandy Field, he served with the 25th Infantry in the Spanish-American War, according to Carolyn Bradford Winston

Moten, a descendant and president of Friends of the Sons and Daughters of Ham Inc.

The Henrico Police Honor Guard is to cap the ceremony with a three-volley salute to the veteran.

The event is to include speakers on the history of the area.

Participants are to include Boy Scouts who have installed a footbridge on the site and joined volunteers from the University of Richmond and elsewhere to remove trees and overgrowth.

The cemetery had largely been forgotten after the last burial in the 1940s, as was the Sons and Daughters of Ham after the group merged with another Richmond fraternal group, the now defunct Independent Order of St. Luke that Maggie L. Walker once led.

In the 1950s, the Bradford family’s residences next to the cemetery were wiped out when the city used its condemnation powers to acquire and raze the homes to make way for a school that was never built. The land, located in Henrico County, later became Bandy Field.

Retired pharmacist Marianne R. Rollings of Richmond assisted Ms. Moten and other descendants to form the Friends group and begin the push for restoration.

Grants from the National Trust for Historic Preservation and the National Endowment for the Humanities have assisted the volunteer effort, the Friends of Sons and Daughters of Ham noted.