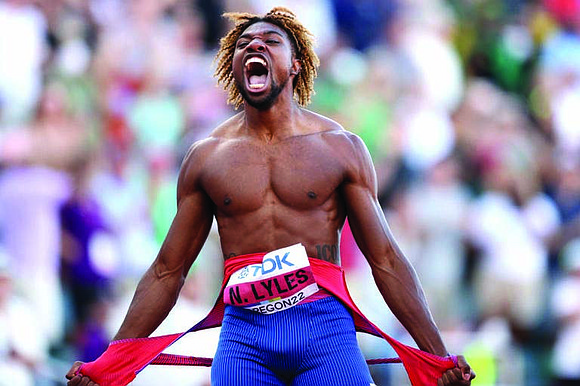 Grant Holloway and Noah Lyles, above, have made the seismic leap from the Virginia High School League to the tip top of the track and field world.

Holloway, who won the 110-meter hurdles, hails from Grassfield High in Chesapeake.

Lyles, the 200-meter champ, shined his star at T.C. Williams High in Alexandria.

Olympic hurdles champ Hansle Parchment of Jamaica withdrew due to an injury. Also, American Devon Allen, who had this year’s top time heading into World’s, had a false start and was disqualified. Allen is now headed to the NFL Philadelphia Eagles camp to work out as a wide receiver.

The state of Virginia just missed a third medal when Britton Wilson finished fifth in the 400 hurdles behind World champ and world record holder Sydney McLaughlin.

Virginians can claim a small slice of McLaughlin’s success. On May 5 she married former University of Virginia football player Andre Levrone.

Wilson, from Mills Godwin High in Western Henrico, has an excellent chance or representing the U.S. in the 2024 Olympics in Paris. She is currently a student at the University of Arkansas.