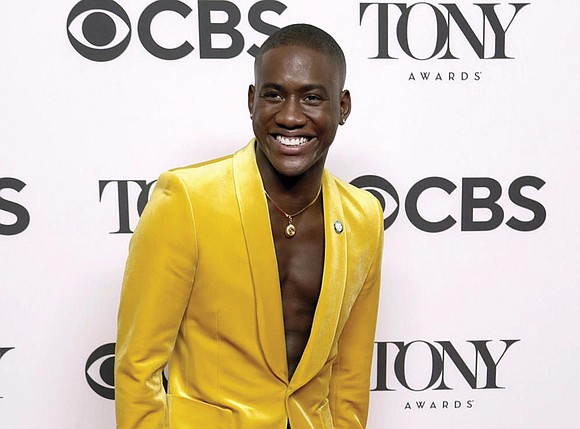 Sidney DuPont attends the Tony Awards: Meet The Nominees media day at the Sofitel New York on May 12 in New York. DuPont is nominated for a Tony for best featured actor in a musical for his role in “Paradise Square.” Photo by Greg Allen/Invision/Associated Press

NEW YORK - Sidney DuPont knew he’d made the right career decision when musical theater icon Chita Rivera not only threw a shoe at him but also slapped his face.

It was in 2019 at a workshop of the Broadway musical “Paradise Square.” Mr. DuPont and A.J. Shively were performing an early number from the show for guests that included Mr. Rivera.

Mr. Rivera was so taken by the performance that she had tears in her eyes and her astonished reaction almost looked like fury. Off came her shoes and out came her hand — all out of love.

“It was one of the best experiences of my life. I don’t think I washed my face for the next two days,” says Mr. DuPont. Rivera asked him his name and said: “I’m so glad to get to know it before the rest of the world does.”

Of course, the rest of the world is catching up with Mr. Rivera. Mr. DuPont, 30, has been nominated for a Chita Rivera Award and a Tony Award this season for his work on “Paradise Square,” with Variety cheering his “earthy, sometimes modern, style that leads from the center” and The Wall Street Journal saying he made “a strong impression.” Mr. DuPont is nominated for best performance by an actor in a featured role in a musical.

“The one thing I can say about this journey is that hard work, kindness and dedication — I know everybody says this — but it really pays off,” he says. “When you are prepared for an opportunity and you seize it, then the hard work definitely pays off.”

Mr. DuPont is, appropriately, a Virgo, reflecting his zodiac sign affinity for a practical and systematic approach to life. He has put in the hard work to get to this point, touring with “Memphis: the Musical,” “A Chorus Line” and “Beautiful: The Carole King Musical.”

“I couldn’t ask for a better dance partner,” says Mr. Shively, also a first-time Tony nominee. “He’s been extremely helpful, just making me feel more confident and just knowing exactly when to give an encouraging word and just giving me tips here and there. I’ve been very lucky to have him.”

Mr. DuPont has been working on “Paradise Square” for five years. It’s a musical about Irish immigrants and Black Americans jostling to survive in New York in 1863. He plays Washington Henry, an escaped enslaved man traveling to Canada on the Underground Railroad who stops in New York to wait for his girlfriend.

“I think he is a romantic, he’s a fighter, but he’s also one of the ancestors whose story often gets left off pages in the history books,” says Mr. DuPont. “I am grateful every single day to be able to tell this story, to tell his story in a way that I think is powerful, dynamic and necessary.”

Mr. DuPont, the middle of three kids, grew up in Philadelphia knowing early on he wanted to be a performer and storyteller. How early? Perhaps even at 2, when his dad plugged a video camera into the TV and filmed his son.

“I’m looking at the camera. And then I see myself on the TV and I run to the TV and I hug the TV,” says Mr. DuPont, laughing. “Maybe that’s when it happened.”

He would go on to graduate from the University of the Arts in Philadelphia — he had amassed enough credits to leave early to go on tour; he’s a Virgo, remember.

One thing he had to overcome was something key to musical theater — his hearing. At 5, Mr. DuPont was diagnosed with cholesteatoma, a skin-lined cyst that invades the middle ear and eats away at the eardrum. He lost hearing in his left ear.

“It made me feel a little other in a way that was surprising. I was already dealing with sexuality and that kind of otherness and then also being Black and, more specifically, darker skinned. So I really had a lot of things that I was really self-conscious about,” he says.

It’s only recently that Mr. DuPont has begun talking publicly about his partial deafness, saying he didn’t realize he was carrying shame about it from grade school.

It’s part of Mr. Shively’s story, too, which may explain their fast connection. His sister was born deaf and a cousin is deaf. “I think that might be one of the things that bonded the two of us,” he says.

Mr. DuPont relies on his training, a camera on the conductor in the orchestra pit and a finely honed internal meter to compensate. In the show, it is he who starts the song “Turn My Life Around.”

“It’s a lot of pressure, but it’s also really cool because here I am, hard of hearing and I’m the person who gets to start the rhythm of an entire number.”

He credits Ms. Rivera for inspiring him to stay with “Paradise Square” during its long incubation and for her fiery reaction to his artistry, saying he felt seen.