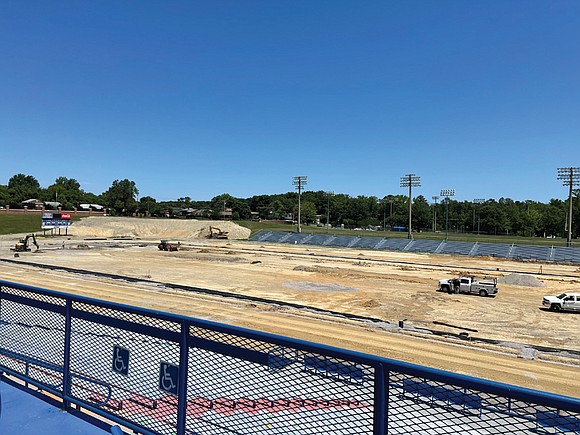 Virginia State University joins a growing number of colleges choosing artificial grass for their football fields. Installation generally takes about 60 days, which means the new field will be ready for the Trojans’ first home game Sept. 10.

When the Trojans open Sept. 10 against West Virginia’s Bluefield State College at Rogers Stadium, Henry Frazier III will be the head coach. Coach Frazier replaced Reggie Barlow, who was 34-16 in five seasons in Ettrick.

Also, a synthetic field will replace the grass field that the Trojans have played on for decades.

Surrounding the football field will be a new state-of-the art polyurethane track. VSU, coached by Wilbert Johnson, has hosted the CIAA track meet for many years.

VSU was 3-6 overall and 3-4 in the CIAA last season. The Trojans opted out of the 2020 season due to the pandemic.

Under Coach Frazier, the Trojans will open the 2022 season on the road Sept. 3 at Lenoir-Rhyne University in Hickory, N.C. Bluefield State will be the home opener challenger.

VSU is following an HBCU trend. Archrival Virginia Union opened the 2021 season with an artificial field of its own named Willie Lanier Field at Hovey Stadium.