Judge Ketanji Brown Jackson is the first Black woman to be nominated to the U.S. Supreme Court. If confirmed, she would be only the third Black justice to serve on the nation’s highest court. 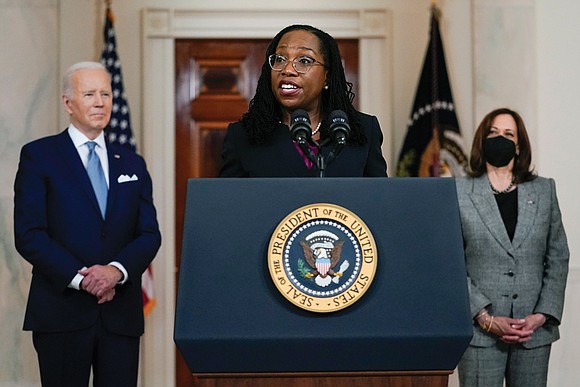 Judge Ketanji Brown Jackson speaks Friday in Cross Hall of the White House after President Biden introduced her as his nominee to the U.S. Supreme Court. Listening at right is Vice President Kamala Harris. Photo by Carolyn Kaster/Associated Press

WASHINGTON - Judge Ketanji Brown Jackson on Wednesday took her first steps on her history-making journey to a seat on the U.S. Supreme Court.

Just five days after President Biden made her the first Black

woman ever to be nominated for the nation’s highest court, the 51-year-old appeals court judge began meeting with leaders in the U.S. Senate who must confirm her to the lifetime post.

Tenuously in control, Senate Democrats are pushing for Ju- diciary Committee hearings later this month, with hopes for the floor vote in April. If confirmed, Judge Jackson would succeed Justice Stephen G. Breyer, 83, for whom she once clerked. In January, Justice Breyer announced he will step down from the bench during the summer.

The timing of the vote will depend on the return of the 50th Democrat, Sen. Ben Ray Lujan of New Mexico, who suffered a stroke in late January, underwent surgery, is in recovery and plans to be back in Washington to support Judge Jackson.

Judge Jackson appears to have been the top choice of President Biden, though he vetted two other candidates, California Supreme Court Justice Leondra Kruger and U.S. District Court Judge J. Michelle Childs of South Carolina, both of whom are Black.

Just after taking office in January 2021, President Biden successfully promoted Judge Jackson with bipartisan Senate support from the U.S. District Court for the District of Columbia to the U.S. Court of Appeals for the D.C. Circuit, which is regarded as a staging ground for future justices.

In nominating her to be the first Black female justice since the court began operations in 1790, President Biden hailed her as “one of the nation’s top legal minds” and said she would continue “Justice Breyer’s legacy of excellence.”

She would be the third Black justice to serve on the court, including the late Justice Thurgood Marshall and current Justice Clarence Thomas. She also would be the first justice with experience as a public defender and only the second current justice along with Jus- tice Sonia Sotomayor to have been a trial judge.

She also would be the second youngest after Justice Amy Coney Barrett, 50.

President Biden described Judge Jackson as “a consensus builder” in noting her legal track record and that she comes from a family of educators as well as police officers.

His nomination fulfills a 2020 campaign promise to nominate a Black woman to the nation’s highest court, following in the footsteps of Republican President Ronald Reagan who promised and

Judge Jackson’s nomination has drawn applause from Black leaders across the country, ranging from Marc H. Mo- rial, president and CEO of the National Urban League, to Melanie Campbell, president of the National Coalition of Black Civic Participation and convenor of the Black Women’s Roundtable.

Cheers also have come from Democrats, including the two Virginians who will vote to confirm her, U.S. Sens. Mark Warner and Tim Kaine, as well as 4th District Congressman A. Donald McEachin, who represents the Richmond area.

Justice Breyer also has been enthusiastic, calling his pend- ing successor “brilliant” and describing her approach to the law as mixture of “thoroughness and common sense.”

Judicial colleagues have shown support for her, along with nearly two dozen lawyers who have clerked at the U.S. Supreme Court. In a statement issued when she was nominated for the appeals court, the former clerks stated that they had “great respect for her legal abilities, her work ethic and her ability to work with colleagues of both like and differing views” and for her ability to treat everyone “who worked for the court with respect and kindness.”

The only disparagement has come from Republicans, most notably Sen. Lindsey Graham of South Carolina, who characterized Judge Jackson as “far left” despite a judicial record showing otherwise. At this point, it is unclear whether Sen. Graham and the two other Republican senators who joined in confirming her to the D.C. Court of Appeals, Sen. Susan Collins of Maine and Sen. Lisa Murkowski of Alaska, will vote for her confirmation to the U.S. Supreme Court.

During her eight years as a federal trial judge, she has heard notable cases, including a 2019 case in which she rejected environmental groups’ efforts to halt President Trump from building his border wall with Mexico.

In another case two years ago, she also shot down President Trump’s claim of absolute privilege and immunity as he sought to block a House committee subpoena for a former White House lawyer. In finding against the president, she wrote that “presidents are not kings” and that White House employees are not his subjects to control, but instead take an oath to uphold and defend the U.S. Constitution and “in this land of liberty, work for the People of the United States.”

She also found a Washington jail liable for mistreatment of a deaf inmate and upheld the right of public employees to collectively bargain.

Judge Jackson already has received Senate confirmation three times, twice for judgeships and once to serve on the U.S. Sentencing Commission, an independent agency that sets guidelines for the terms those convicted of crimes will serve in federal prison.

Judge Jackson, who also has worked in private law firms during her 26-year legal career, would bring extensive experience to the high court from her service on the bench, as a civil litigator, mediator and arbitrator and as a defense lawyer.

Born in Washington, D.C., Judge Jackson grew up in Florida. Profiles of her have recalled that as a pre-schooler, she worked on coloring books as her father, a former teacher, studied law. He later rose to become the chief attorney for the Miami-Dade School System.

Meanwhile, her mother spent her career in education, eventually serving 14 years as principal of an arts-oriented magnet high school.

While a Harvard undergrad, Judge Jackson met her future husband, Dr. Patrick G. Jackson, also a Harvard undergraduate. He currently serves as chief of gastrointestinal surgery at Georgetown University Hospital. She calls him “my rock today and every day.” They have two daughters, Leila, a 17-year-old high schooler, and Talia, 21, who is in college.

During her nomination acceptance speech last Friday, the judge turned to her younger daughter and told her that “no matter what title I have, I’ll always be mom.”