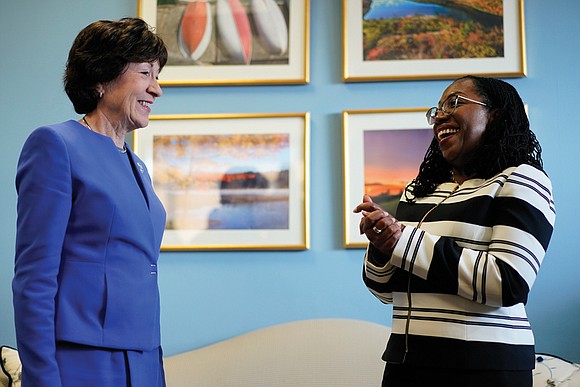 The Maine senator is the first Republican to support the president’s bid to make the highly regarded federal appeals court judge the first Black woman to serve on the country’s most powerful judicial body.

The senator disclosed her decision after meeting with Judge Jackson for a second time Tuesday. Sen. Collins praised Judge Jackson as possessing the “experience, qualifications and integrity to serve on the Supreme Court,” while bemoaning the increasing partisanship of the confirmation process.

The announcement came as the 22-member Senate Judiciary Committee prepares to vote on Judge Jackson’s confirmation on Monday, April 4.

Sen. Collins is not a member of the committee, which is split between 11 Democrats and 11 Republicans, and is anticipated to deadlock.

In a signal that a committee deadlock is likely, Republican Sen. Thom Tillis of North Carolina, who is a member of the Judiciary Committee, disappointed Democrats by publicly stating Wednesday that he would vote against confirming the judge, citing what most legal observers see as a bogus concern that she “may legislate from the bench.”

While the Senate also is divided 50-50 between Republicans and Democrats, Sen. Collins’ vote would ensure a clear 51-vote majority for Judge Jackson, raising expectations the final confirmation vote could come as early as Friday, April 8.

Judge Jackson, who could be confirmed now without the need of a tie-breaking vote from Democratic Vice President Kamala Harris, is to join the court after retiring Justice Steven Breyer steps down. He has said he would stay until the court completes its current term in June and recesses for the summer.

Sen. Collins was widely viewed as the most likely GOP vote for Judge Jackson, and President Biden had called the senator at least three times to encourage her to support confirmation.

Five other GOP senators also are seen as potential supporters, according to political insiders, Sens. Lisa Murkowski of Alaska, Mitt Romney of Utah, Roy Blunt of Missouri, Rob Portman of Ohio and Richard Burr, the other senator from North Carolina.

Sen. Murkowski was among the three Republican senators who backed Judge Jackson when she was nominated to the D.C. Circuit Court of Appeals last year. The others were Sen. Collins and Sen. Lindsey Graham of South Carolina, who is expected to oppose the confirmation.

Sen. Blunt, who has a track record of bipartisanship and also is retiring, has said he “really would like to vote for the first Black woman to go on the court,” but has not committed to doing so.

Separately, Sen. Portman has not committed, but has described Judge Jackson as “qualified” and also has a track record of voting for President Biden’s initiatives 68 percent of the time.

Another prospect is Sen. Romney, who opposed Judge Jackson’s elevation to the D.C. Appeals Court last year but has expressed distaste for the questioning she faced during the committee hearings. He has broken with his party before.

He has remained mum about his vote, as has retiring Sen. Burr, who generally votes along party lines, but did vote to impeach President Trump and might back this history-making nominee.

In her statement of support, Sen. Collins noted that the role the U.S. Constitution clearly as- signs to the Senate is to examine the experience, qualifications and integrity of the nominee. “It is not to assess whether a nominee reflects the ideology of an individual Senator or would rule exactly as an individual Senator would want.”

The senator stated that she favored giving deference to the president’s choice, even if she disagrees, so long as the person is qualified.

“This approach served the Senate, the court and the country well,” Sen. Collins stated. “This is the approach that I plan to continue to use for Supreme Court nominations because it runs counter to the disturbing trend of politicizing the judicial nomination process.”