Richmond’s last Confederate monument to come down – A.P. Hill on North Side 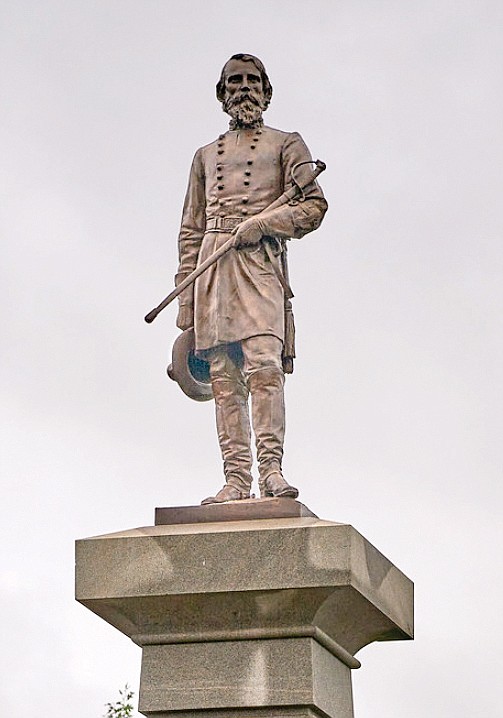 The last standing Confederate monument in Richmond is on the way out.

City Council cleared the way Monday night for the removal of the statue of Confederate Gen. Ambrose Powell Hill Jr. that dominates the intersection of Laburnum Avenue and Hermitage Road in North Side.

The city took down its other Confederate monuments nearly two years ago and conveyed ownership to the Black History Museum and Cultural Center of Virginia earlier this year. But officials haven’t been able to move forward with removing the Hill monument because the general is buried beneath it.

After months of fruitless talks with Hill family descendants, Mayor Levar M. Stoney’s administration is fed up and ready to act to get rid of the statue that has stood at the site for 130 years.

Acting on an expedited resolution, the council voted 9-0 to approve the administration’s request for authority to transfer the statue and monument to the Jackson Ward-based Black History Museum.

Although the Confederate statues physically remain in city hands, the museum has agreed to engaged in a community process to determine what happens to the items.

The removal date for the A.P. Hill statue is still up in the air.

Lincoln Saunders, the city’s chief administrative officer, said the first step will be to get an order from Richmond Circuit Court allowing the city to transfer the general’s remains that are buried at the site to Fairview Cemetery in Culpeper, his hometown.

City Attorney Haskell C. Brown III is preparing the request that could be presented to the court this week, Mr. Saunders indicated.

Gen. Hill’s remains have been a key sticking point. Killed in 1865 in one of the last battles of the Civil War, the general’s body — after several other stops — was interred at the North Side site in 1892, with the statue serving as his grave marker. The land was provided by Richmond cigarette baron Lewis Ginter.

City officials did not respond to a Free Press request for an explanation of a sole-source contract being awarded to Bennett Funeral Home in Richmond to handle the transfer, reinterment and marking of the new grave if the order is granted, rather than allowing other funeral homes, including Black-owned operations, to compete.

It is not known whether any of the Hill family descendants may contest the removal of the remains. The property upon which the statue is located apparently is not owned by the city. There is no record on file that the city ever took possession of what amounts to a traffic circle, according to the City Attorney’s Office.

However, the property is being treated as city owned as no record of ownership of the small plot of land has turned up, and no one has stepped forward to claim it.

The statue and circle have long been considered a traffic hazard.

The Hermitage Road Historic District Association has been urging the city to remove the statue for nearly two years.

Team Henry Enterprises, a Black-owned construction company, already has been awarded a contract to remove the statue and pedestal of the slavery-defending military man. The company previously removed other Confederate white supremacist symbols from Monument Avenue and from other locations in the city.