Virginia Museum of History & Culture reopens May 14 after $30M renovation 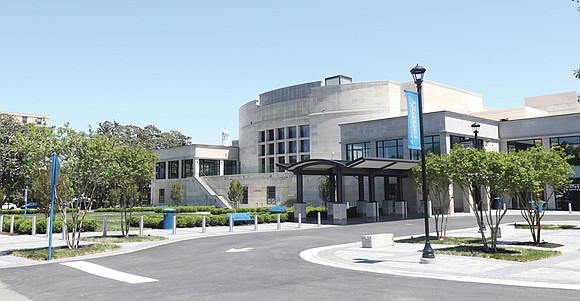 Visitors to the newly renovated Virginia Museum of History & Culture at 428 N. Arthur Ashe Blvd. will see from the rear an enlarged facility with a wide veranda and public greenspace for events and gatherings and 50 percent more exhibition space inside. Photo by Regina H. Boone

The Virginia Museum of History & Culture will reopen this weekend after a two-year, $30 million renovation with a celebration featuring new exhibits, rich family stories, entertainment, activities and food trucks.

“The museum has a magical new spirit of better connecting to the local community as well as the Commonwealth, while making the museum more vibrant,” Jamie O. Bosket, the museum’s president and chief executive officer, told the Free Press this week.

“In a stronger way than the museum ever has, the VMHC tells a story that is reflective of all Virginians,” Mr. Bosket said. “From the moment you walk into the new entryway, visitors will see ‘Faces of Virginia.’ These 71 portraits, looking like all Virginians, tell the story of the Commonwealth across time that resonant and reflect all visitors’ stories.”

The museum is a re-imagined 250,000-square-foot complex, two-thirds of which has been renovated. In addition to the new two-story entrance atrium, the museum has an orientation theater that will show “Virginia: As Far As You Can Imagine,” a 17- minute film highlighting moments and scenes in Virginia history that serve as an introduction to the museum and its holdings.

The museum also now has about 50 percent more exhibit space, a new research library, community meeting and gathering spaces and a new café and museum store.

The exhibits are designed to open minds as they offer different perspectives and make connections between yesterday and today by presenting history through a fresh and accessible lens.

“Our Commonwealth,” the centerpiece marquee long-term exhibition, launches audiences on a memorable and scenic journey with living murals — large-scale, changing digital projections — and custom soundscapes that immerse visitors in the arts, culture, food, music, industry and people of each region of the state.

More than 9 million artifacts are in the museum’s vast collection, with many items featured in “Our Commonwealth,” an exhibit that will immerse visitors in the culture, food, arts, music, industry and people of each region of the state. This region features everything from Virginia’s noted pork industry, right, in Smithfield to watermen working Virginia’s rivers and coastline.

Other new exhibits feature stories and artifacts from partner organizations and cultural institutions, including the Smithsonian. Exhibits include, “American Democracy: A Great Leap of Faith,” examining the government’s founding and continuing evolution; “The Lost Cause: Myths, Monuments & Murals,” which explores the history of the South’s Lost Cause in the Civil War with military murals and the sculpture of Confederate Gen. Robert E. Lee that the state had removed from Statuary Hall in the U.S. Capitol in 2020 after 111 years; “Uncommon Strength,” an exhibit in partnership with the Virginia Department of Historic Resources, about the archaeological interpretation of artifacts; “Treasures of Virginia,” a display of items related to individuals or events that helped shape the state and the nation; and “History Matters,” selections from the museum’s more than 9 million-item collection.

The museum is owned and operated by the Virginia Historical Society, a private, nonprofit organization that was started in 1831. The changes were guided by the museum’s strategic plan as it looks toward its 300th anniversary in 2031 and the commemoration of the 250th anniversary of the United States in 2026.

“The museum’s content will aid visitors in seeing and speaking absolute truths about Virginia’s history,” Mr. Bosket said. “We must remember all parts of our history,” he said.

One of the artifacts displayed in the museum’s Great Hall is a 1918 Kline Kar, one of only two known surviving automobiles made by the Kline Motor Car Company. Founded in 1909 in York, Penn., the company moved to Richmond in 1911 and produced about 6,000 cars before closing in 1924.

This 1918, seven-passenger touring car produced by Kline Motor Car Company was part of the fleet owned by A.D. Price, a prosperous Black businessman and Richmond funeral home director. The car is one of two known to still exist of about 6,000 made. It is on display in the museum’s Great Hall.

There also are historical images of the late Katherine G. Johnson of Newport News, the trailblazing NASA mathematician whose calculations helped launch the first manned space flight in 1961 and who was immortalized in the film “Hidden Figures;” family trees and diaries; and lockets and portraits that speak to the way families remember their decedents and themselves.

“The exhibits, messages and information are quite striking,” Mr. Bosket said.

Details about the grand reopening events and the new exhibits: virginiahistory.org.