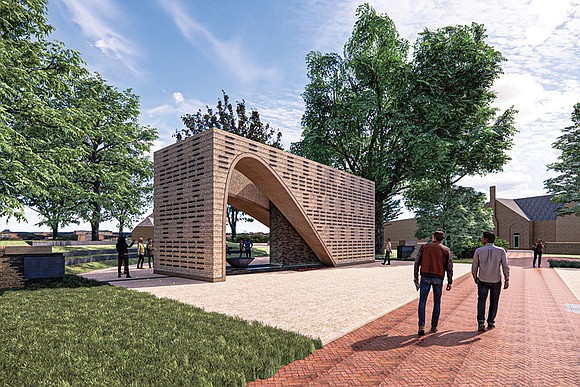 Rendering of “Hearth: Memorial to the Enslaved” Photo courtesy of William & Mary

WILLIAMSBURG - William & Mary, the nation’s second oldest institution of higher education, dedicated a brick memorial last Saturday that honors people who were enslaved by the university.

The memorial, called “Hearth: Memorial to the Enslaved,” is 20 feet high and 16 feet wide and resembles a fireplace hearth symbolizing a place of community and the center of domestic enslavement. A vessel that will hold a fire that will burn on special occasions will be installed later, officials said.

The memorial, designed by the Richmond-based architectural firm Baskervill, cost more than $2.9 million to build, including construction and material costs that were impacted by supply chain delays and construction inflation.

The university was chartered in 1693. It benefited from enslaved labor for 170 years. It’s unclear how many people the university enslaved, but historians have discovered the names of more than 100 people owned by the college or its employees and students.

Black bricks embedded in the memorial are engraved with the names of those who had been enslaved, while some of the bricks say, “Unknown Person,” reflecting enslaved individuals who were mentioned in the school’s records but were unnamed.

Research conducted by The Lemon Project, an initiative started by the university in 2009 to uncover the university’s connection to slavery, provided the names immortalized on the memorial.

Enslaved people made the bricks that built the Wren Building, and they erected the building itself.

“Slaves were as inseparable a part of the college as the old bricks of the College Building itself,” Jennifer Oast wrote in a book about slavery in Virginia.

“Frank acknowledgment of painful facts is powerful and necessary for a healthy, pluralistic democracy,” said W&M President Katherine A. Rowe. “

“We have much work still to do at William & Mary. Yet, by naming plainly the dehumanization of those enslaved here and their agency as human beings, this memorial begins to fulfill our collective responsibility to affirm the value of labor that has been invisible and to recover and share stories that have gone untold here in Williamsburg, in the Commonwealth and in our country.”

The memorial’s cost was covered by private funds and contributions from the board of visitors.

Libations also were poured and participants laid flowers at the base of the memorial.

“Although this is a wonderful achievement, it is only one step in our ongoing work of inclusive excellence and reconciliation as we share a richer, fuller and more inclusive history of William & Mary,” said Chon Glover, W&M’s chief diversity officer.

“May we remember and honor our ancestors and the legacy they left for us as long as the sun shines and the waters flow.”

During the 2020-21 academic year, the university enrolled about 6,200 undergraduates, about 410 of whom identified as African-American.