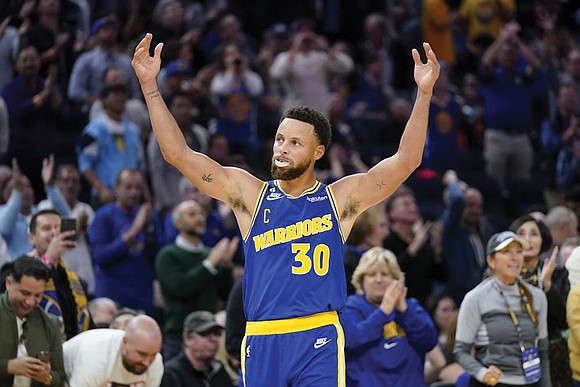 Golden State Warriors guard Stephen Curry (30) celebrates Monday after shooting a 3-point basket against the Sacramento Kings during the second half of an NBA basketball game in San Francisco. Photo by Jeff Chiu/The Associated Press

“Steph was breathtaking,” Warriors Coach Steve Kerr said. “He’s one of the greatest players of all time. He plays well on so many nights... this even seemed like something special for him.”

Andrew Wiggins had 25 points and Klay Thompson added 16 for the Warriors before Curry made two free throws with 1.3 seconds left to secure the win.

Curry, Thompson, Green and Wiggins returned to the lineup after not playing against New Orleans on Friday.

Thompson is not playing on back-to-back nights because of his anterior cruciate ligament and Achilles tendon injuries in 2019 and 2020. Green is under similar limitations because of a back injury suffered last season.

Curry was being rested because of elbow soreness and Wiggins because of a sore left foot.

De’Aaron Fox had 28 points and six assists for Sacramento (3-6), which had a chance to tie before Kevin Huerter’s missed 3-pointer on the final possession.

“I feel bad for our guys,” Mike Brown said on the final possession. “It’s tough being a Sacramento King.”

After the Kings went down 12 early, Sacramento closed the first quarter on a 14-2 run. The Warriors opened the second half on 13-2 run to cut it to one point with 8:24 left in the third.

“I really liked our energy in the second half,” Kerr said. “It just felt like we were making our presence... we did enough to get it done.”

Sacramento lost to Golden State 130-125 on Oct. 23, which was highlighted by an 89-point first half from the Warriors. Golden State plays in Sacramento on Sunday.