Yellen boosts Biden’s agenda in Virginia as midterms near 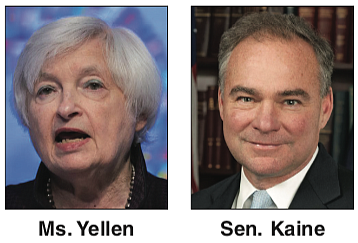 HERNDON Treasury Secretary Janet Yellen is promoting Biden administration policies as the key to advancing the nation’s “long-term economic well-being” in the lead-up to the midterm elections.

Voters have made clear that price increases are a top concern. A June Associated Press-NORC Center for Public Affairs Research poll showed that 40 percent of U.S. adults specifically named inflation in an open-ended question as one of up to five priorities for the government to work on next year.

Democrats want to retain their control in Congress and will need to convince voters they can wrangle inflation, which accelerated in September. In Virginia, Ms. Yellen talked about how a boost in domestic industrial manufacturing will be one of the solutions.

“Our government’s failure to invest in innovation has had wide-ranging impacts on our long-term economic well-being,” she said during her speech. “At the most fundamental level, it impacted our productive capacity.”

She said that over the past year, President Biden’s administration “has begun to reverse that trend.”

“We have advanced an economic plan that finally puts innovation and technology at the forefront of our national agenda,” Ms. Yellen said.

Sen. Kaine said Virginia “was a laggard in clean energy even up to five or 10 years ago.” But with investments from the new federal climate and health care law and other programs “we’re now positioned to lead the United States in offshore wind,” he said.

Ms. Yellen also attended a roundtable with local entrepreneurs and people representing Virginia colleges who are focused on semi- conductors, advanced manufacturing and other emerging technologies.

“Together, our efforts are raising our economy’s aggregate production capacity,” she said. “And in turn, we are raising America’s long-term economic outlook.”

Early voting is underway in many states, including Virginia.