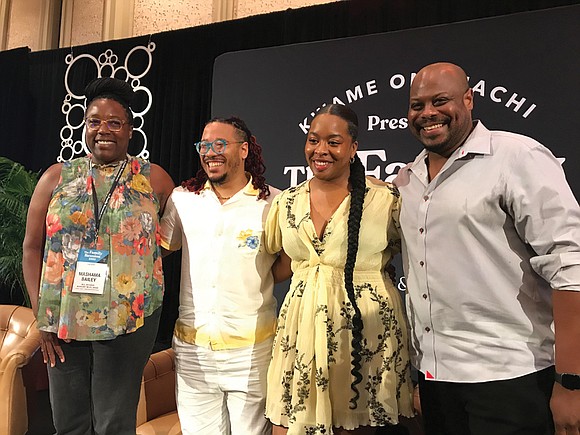 Community High School graduate Shenarri Freeman, second from right, is executive chef at Cadence restaurant in New York’s East Village. During an Aug. 20 panel discussion, “Building a Legacy, Then and Now,” at the Salamander Hotels and Resorts in Middleburg, Ms. Freeman said family meals in Richmond most inspire her. Other panelists included (from left) Mashama Bailey, Angel Barreto and Preston Clark. Photos by Bonnie Newman Davis

Middleburg Chef Shenarri Freeman started cooking 10 years ago at the 9:30 Club, a concert hall in Washington, D.C. Then a pre-physical therapy student at Howard university, she took the gig to get free concert tickets.

Simple entrees were prepared and served: olive tapenade, hummus, vegan chili, sandwiches. At the time, Ms. Freeman, who grew up in Richmond surrounded by a family of talented cooks who prepared heavy, traditional Southern meals, had no real interest in developing her own culinary skills.

Today she prepares mouth-watering meals as executive chef at Cadence, a James beard-nominated vegan restaurant in New York’s East Village that has been described as “a breakout vegan hit.” In the past year alone, Ms. Freeman’s work has repeatedly been reviewed or mentioned in The New York Times, Vogue and other publications.

Ms. Freeman’s arrival in New York came a few years after illness led her to try a vegan lifestyle in 2016. Ninety days after she started eliminating animal products from her diet, she felt better and never looked back.

A 2011 graduate of Richmond’s Community High School, Ms. Freeman didn’t give much thought to cooking even after working at the 9:30 Club for several years. but as she continued to work in different restaurants, including a stint as a floor manager at Restaurant Marvin, Jack rose, Songbyrd and Momofuku CCDC, she sharpened her cooking skills.

“I didn’t really care about it, but it was something to learn about,” she said during an Aug. 20 panel discussion, “building a legacy, Then and Now,” at the Salamander Hotels and resorts in Middleburg. She was joined by Angel Barreto, Preston Clark and Mashama Bailey, each of whom have their own fascinating back stories. The three-day “Family reunion” event was hosted by chef and cookbook author Kwame Onwuachi, along with Sheila C. Johnson, founder and CEO of Salamander.

As her interest in cooking grew, Ms. Free- man, who’d left Howard for financial reasons, began searching for cooking programs. She moved to New York in 2019 to develop her culinary skills at the institute of Culinary education’s Health Supportive Culinary Arts program. When graduating from her program, where she focused on plant-based nutritional cooking, she was the commencement speaker for her 2021 class, according to her website, https://shenarrigreens.com/.

determined and committed to stay on top of her craft, she has served as the head chef at greedi Vegan, volunteered at the James beard Foundation House and served as sous chef to numerous chefs for private events and dinner parties in New York.

She discounts notions that vegan food is bland and boring, and believes her vegan soul food menu, which includes vegan fried lasagna and green collard wraps will convince any naysayer.

Firm beliefs in holistic health and healing also guide her.

“i think about it daily and in the beginning (of her vegan journey) the messaging was louder,” she said. “I try to keep that messaging because my ultimate goal is to share information about incorporating small changes to anyone’s lifestyle ...that’s a win for me because we have a lot of health issues in our community.”

Ms. Freeman, 29, said she loves living in New York because of its diversity, fast pace and the food scene.

“There are 25,000 restaurants here and I can go to a different restaurant and get a different meal” and never run out of places to eat,” she said during a phone call two days after the Salamander panel discussion.

When she is in Richmond visiting her mom, Vernice Freeman, she finds inspiration simply from “being around the table,” surrounded by aunts, uncles and dozens of cousins.

“The food my family makes today...I’ve eaten my entire life,” she said. “What excites me is being around my family. i’m the baby of the family.”

Family and showcasing black cooking traditions are the ideas behind Salamander’s “Family reunion” in Virginia’s picturesque wine and horse country on 340 acres near the Blue Ridge Mountains. Carla Hall, Dr. Jessica B. Harris, Alexander Bernard Smalls, and Melba Wilson were among the celebrity chefs who attended this year’s event that attracted 750 people in its second year.

As a young chef who rapidly is approaching the celebrity status of other culinary experts, Ms. Freeman said she was “still trying to let the experience marinate. I’m just blown away. It made me emotional to even be there surrounded by people I’ve known or looked up to for 10 years.”