Legislature will move to new building after 2023 session 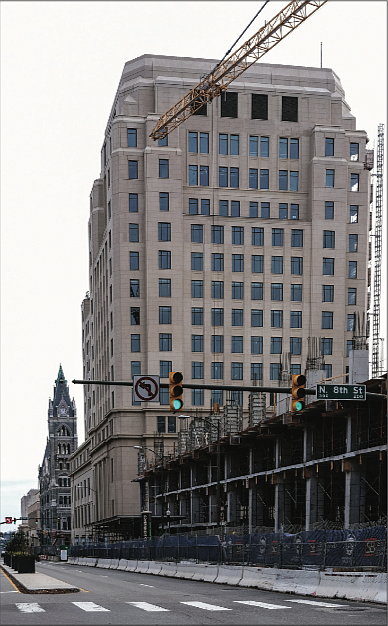 The Virginia General Assembly has announced it will not hold its 2023 Regular Session in the new General Assembly Building (GAB) due to supply chain issues that threaten to prohibit completion of the building in time to prepare for a successful legislative session.

Through at least the end of the 2023 Regular Session, the General Assembly will remain in the Pocahontas Building, where member and staff offices, sections of the House and Senate Clerk’s Offices, and various legislative commissions have been relocated since 2017 for construction of the new building, according to a news release from the Department of General Services.

DGS, which is managing construction of the new building for the legislative branch of Virginia’s state government, recently informed the House and Senate Clerks that delays of critical equipment needed for building code compliance and operations would make it difficult to meet the General Assembly’s anticipated functionality for the 2023 legislative session.

The new building was on schedule for the General Assembly members and staff to occupy in mid-October prior to these supply chain issues, which now critically impact completion and leave less than three months to prepare for the session that starts Jan. 11, 2023, according to the news release.

“Preparing for a legislative session takes a lot of detailed planning, thoughtful organizing and close coordination with many entities to ensure the people’s business is conducted in the most timely, deliberate and transparent manner possible,” said G. Paul Nardo, clerk of the House of Delegates. “Like so many, I regret not being able to move in on time to the first purpose-built GAB for the public to more easily observe and actively participate in the law-making process. Unfortunately, we simply are not immune to the delays, prolonged delivery schedules and other deferrals being experienced by so many across Virginia and around the country and world. Postponing the legislature’s move into the new GAB until spring 2023 is a sensible and realistic decision to make at this time given current circumstances.”

Susan Clarke Schaar, clerk of the Senate, added: “Our teams have worked so diligently in planning and designing a building that will enhance the opportunity for the citizens of Virginia to participate in the legislative process, and we look forward to seeing all that work materialize. Unfortunately, supply issues and COVID-19 have made major im- pacts on the process and we cannot at this time ensure a functional and complete building. While this is a setback for those who have worked so hard, we know it will be correct when it opens.”

Constructed on the same footprint as the building it replaced, the new GAB is 414,000 square feet with 14 stories above grade and one below. The Modern Classical design incorporates the existing original 1912 facade, which was stabilized in place during demolition. The lower four floors include various public functions, including committee rooms, a cafeteria and other useful meeting facilities. It will be connected via tunnels to the new parking deck at the corner of Broad and 9th streets and to the Capitol’s underground Visitor’s Center.

“From the beginning of this project, DGS has been committed to delivering a building that is fully operational, thoroughly tested and ready to conduct business several months ahead of the legislative session. I remain committed and continue to push our contractor to deliver a completed project; however, with supply chain issues I am no longer confident you can occupy the new General Assembly Building in October nor that the building can be fully operational as designed for the 2023 Session of the General Assembly,” DGS Director Joe Damico wrote in a letter to the Clerks in late August outlining the delays. “The upcoming 2023 legislative session must proceed in a facility without operational disruptions, and I cannot guarantee that condition in the new building at this time.”