Rivalry brings out the spirit 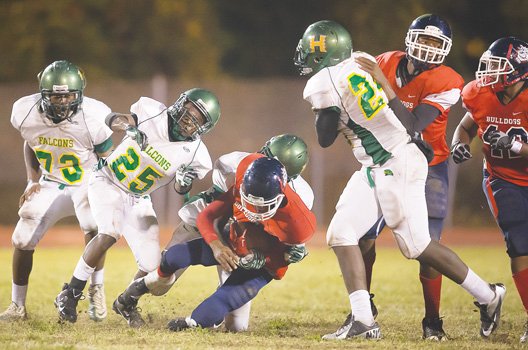 It was a classic showdown between two city rivals — George Wythe and Huguenot high schools.

And the nearly 800 students, family and friends packing the stands Friday night were ready for a great matchup — or dustup. After all, both of the South Richmond schools were hungry for a win.

The Wythe Bulldogs were riding high after recording their first win of the season, 18-6, over National Christian Academy in Maryland a week earlier. They finally had snapped a 26-game losing streak and were looking for a repeat.

The Huguenot Falcons were eager for their first win of the season. They’d already had four losses under coach Bryan Jennings. And they had beaten George Wythe every year since 1987.

George Wythe supporter Letitia Buster-Ford was cheering from the stands.

“I’m here to root for my son, Kane,” a tackle for the Bulldogs, “and to let people know that Richmond Public Schools is coming back,” said Ms. Buster-Ford, a 1987 Armstrong-Kennedy graduate.

“Richmond schools have been given such a bad name. We haven’t had any problems this year. And our coach, Frank Coston, is doing a great job.”

Across the field, Huguenot band member Jermaine Jackson also was excited, but for a different reason.

As the schools’ bands rocked, cheerleaders launched into high-stepping routines. The crowd loved it.

Students talked with friends, and on this fall evening, everyone enjoyed the spirited contest on the field.

When the dust settled, it was the Falcons who got to celebrate a 32-14 win and enjoy a victorious bus ride back to their Forest Hill Avenue campus.

The supporting casts of both teams did their part to make it a memorable evening. The 10-member George Wythe cheerleading squad, under the direction of school counselor Charnelle Smith, brought the team’s fans to their feet early and often, as did the marching band led by Nat Boyd.

Across the field, a dozen Huguenot cheerleaders provided an equally spirited boost to the school spirit of hundreds of Falcon fans.

Tiffany Garland, the Huguenot cheering squad’s coach, said she’s all about instilling “a culture of discipline and school spirit” in her squad.

Nearby, Huguenot teacher Johnathan Coward skillfully directed the 60 members of the Huguenot marching band as they kept the Falcon faithful entertained.

Isaiah Jerman and three other members of the George Wythe Army JROTC presented the American flag prior to the game.

“I’m interested in the military and want to make a career in the Army or Marines,” said the junior.

Among those cheering the opening kickoff was Donald Cook, a member of the Community Care Unit with the Richmond Police Department.

He said he was there to “lend support” to Wythe football player Arie Carter and band member John Holt, participants in an RPD program known as the Young Adult Police Commissioners. The program mentors young people in such areas as college preparation, public speaking and developing better study habits, Mr. Cook said.

Perhaps the most valuable off-the-field performer was Purnell Spears. He provided colorful public address commentary from the press box. He said he has been an ardent Wythe supporter for 35 years.