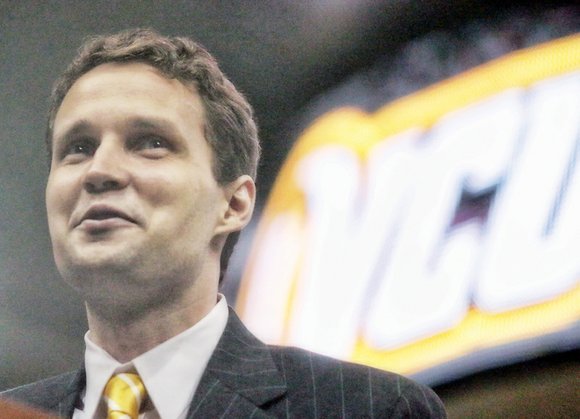 Will Wade is welcomed back Wednesday to Virginia Commonwealth University as the new head basketball coach with a pep rally atmosphere at the Siegel Center. Photo by Sandra Sellars

Among Shaka Smart’s first duties upon becoming Virginia Commonwealth University’s basketball coach in 2009 was to hire Will Wade as an assistant.

Smart referred to Wade as “my first hire.”

After Smart’s resignation for the head coaching job at the University of Texas last week, among the first moves the VCU administration made was to hire Wade as head coach for the Rams.

The 32-year-old Nashville native was introduced as Smart’s successor in an open-to-the-public announcement Wednesday at the Siegel Center that seemed more like a pep rally than a news conference, complete with The Peppas pep band and hundreds of loud cheering fans in the campus arena.

“I could not be more excited about returning to VCU,” Wade said.

“I look forward to leading this group of student-athletes and building on the momentum established through the great players, coaches and people that make the VCU brand nationally recognized.”

He said “Havoc” will continue to reign at VCU.

Wade served under Smart for four seasons — during that period, the Rams were 111-37 — before becoming head coach at Tennessee-Chattanooga of the Southern Conference.

His UTC Moccasins were 40-25 over two seasons, including 22-10 this past season when Tennessee was 15-3 in the conference, second to Wofford College.

On a down note, his UTC final season ended badly with a 69-67 Southern Conference quarterfinal tournament loss to last-place Furman University.

Wade, who worked previously with Smart as Clemson assistants in 2006-07, was Southern Conference Coach of Year in 2014.

VCU has 10 returning players from last season, including three that Wade helped recruit prior to 2013 — rising senior Melvin Johnson and juniors-to-be Jordan Burgess and Mo Alie-Cox.

Also as a VCU assistant, Wade helped lure Juvonte Reddic and Rob Brandenberg to the Rams. Both have since graduated.

According to ESPN, they represent the nation’s 28th best recruiting class.

While Wade flourished in the Southern Conference, his teams were not competitive against stronger teams. Non-conference losses were to Wisconsin (89-45), Butler (70-48) and Georgia (86-55).

There are similarities. This past season, UTC forced an average of 13 turnovers per game while averaging 6.6 steals.

Among Wade’s top performers this past season was 6-foot-10 VCU transfer Justin Tuoyo, who blocked 104 shots and was named Southern Conference Defensive Player of Year.

The UTC to VCU move represents a serious upgrade for Wade.

The Atlantic 10 Conference, which VCU is a part of, was the nation’s seventh-ranked conference; the Southern Conference ranked No. 30.

After one season as Smith’s top aide, McCarthy, a three-time Southern Conference Coach of the Year, became head coach at VCU until 2002, when he was replaced with Jeff Capel III.

“We knew quickly that Will is the bet fit to lead the VCU basketball program during our exhaustive and rapid national search,” said VCU Athletic Director Ed McLaughlin.

Rhoades and Wade were interviewed by McLaughlin during Final Four activities in Indianapolis.

Another Smart aide, Mike Morrell, has joined Smart in Austin as assistant coach.