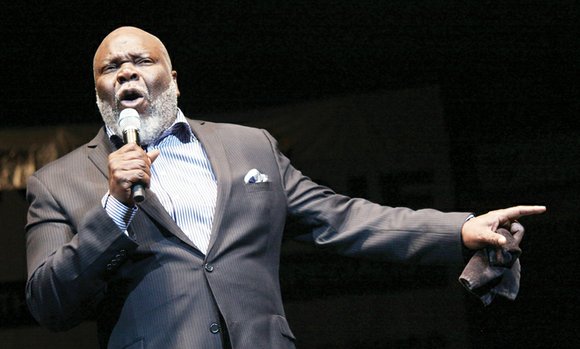 Bishop T.D. Jakes delivers inspiration and a spiritual message to an enthusiastic audience of 4,500 people last Saturday at the 2015 Transformation Expo at the Richmond Coliseum.

Time and again, fiery exhortations by the 57-year-old, best-selling author and filmmaker who leads the 30,000-member Potter’s House church in Dallas drew the enthusiastic audience of about 4,500 people to its feet. They applauded and shouted approval during his moving one-hour message.

The event, at the Richmond Coliseum, also featured about a dozen gospel artists.

As is his penchant, Bishop Jakes was sweating profusely within a few minutes. He repeatedly wiped away beads of perspiration from his head with the trademark towel he holds in one hand as he preaches.

He warmed the audience when he said his Richmond hosts had spoiled him.

“I may move to Richmond” because of their hospitality, he said.

“I ate at the Croaker’s Spot (restaurant) and broke all of my dietary rules,” he said, drawing laughter from the audience.

“He has that gospel flair,” Henrico County resident Mark Hamlin told the Free Press. “He’s one of the premier ministers of our time and one you have to put on your list of people to see in person.”

Turning serious, Bishop Jakes said, “I’m on a divine mandate to be in Richmond.”

He introduced his biblical sermon from the Gospel of Luke, chapter 8, verse 43. It told of a woman who was healed by faith after touching the hem of Jesus’ garment.

“Everybody in here has an issue,” he said, titling his sermon, “A Journey Toward Wholeness.”

“In all our lives, we have some fragmentations, some areas in which we’re lacking,” Bishop Jakes said. “Everybody in here is on a journey toward wholeness in at least one area.”

As an example, he said, “Some people are good spiritually, but financially whack.”

He added: “It takes you half of your life to know another person is not going to make you whole. You’ve got to stand on the integrity of who you are in God.”

The bishop, whom TIME magazine has dubbed “America’s Best Preacher,” encouraged audience members to move forward regardless of where they are in life and “to applaud yourself for small steps. Kiss yourself in the mirror or take yourself out to dinner,” he said.

“If you are going to reach wholeness, you have got to become radical,” he added.

He told the audience to believe a breakthrough is coming in 2015.

“I want to talk to radical, relentless and tenacious people who have made up their minds, ‘I’m going to come out of this,’ ’’ he declared, as audience members cheered.

Judging by the smiles and conversations among people as they left the Coliseum, Bishop Jakes left his audience feeling in a much better place spiritually.

“This is what I came for,” said Monique Colley of South Side. “He was speaking to me today. He is truly a man of God.”

Though Radio One officials would not say how much the media company paid Bishop Jakes to appear, reports have stated he and other high-profile evangelists get up to $100,000 for speaking engagements.