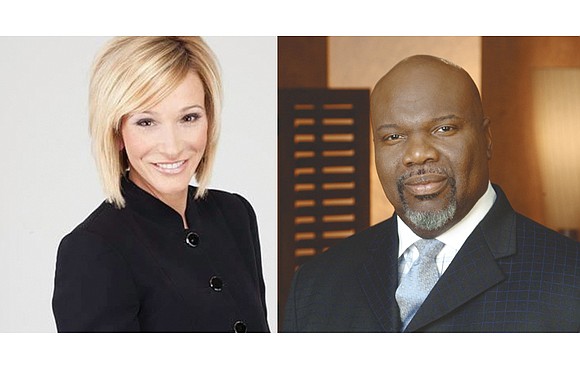 Less than a day after the man she spiritually mentored won the presidential election, the pastor who has been called “Donald Trump’s God whisperer” preached a black church revival in North Carolina’s most pro-Hillary Clinton county.

The Rev. Paula White did not come to Durham to talk about politics. She did not mention Mr. Trump. And many among her listeners seemed unaware of her now famous connection.

Instead, the celebrity preacher in stiletto boots and a black dress gave her personal testimony Nov. 9, as her husband, former Journey keyboardist Jonathan Cain, played music softly in the background.

“You are in a year of greatness. You are in a year of restoration,” Rev. White preached to a group of some 100 worshippers, almost all of them African-American. They had gathered in a large, windowless room at Faith Assembly Christian Center, a simple building in a predominantly black neighborhood of Durham.

Asked afterward about her ties with President-elect Trump, she declined to be interviewed “out of respect for the church.”

Pacing around the stage, her Southern accent thickening as she grew more animated, Rev. White echoed basic themes of the prosperity gospel: God wants people to thrive. It is possible to transform your life through positive thinking and prayer.

These are themes that might sound familiar to Mr. Trump, who has praised Norman Vincent Peale, a mid-20th century pastor whose willingness to link faith, positive thinking and personal success helped lay the groundwork for today’s prosperity gospel preachers.

This preaching often shies away from explicit invocations of politics. If Rev. White does become a kind of Billy Graham to the Trump administration, she will have to balance that role with the apolitical message of the prosperity gospel that aims to cross racial and political lines.

Rev. White is the lead pastor of the New Destiny Christian Center in Apopka, Fla., an Orlando suburb.

Her mother was an alcoholic and her father killed himself when she was 5. She has been married three times. During her sermon last week, she spoke about surviving physical and sexual abuse and being called “trailer trash.”

Although she is Caucasian, the pastor first gained national prominence as a preacher on Black Entertainment Television in the early 2000s. Her mentor is Bishop T.D. Jakes of The Potter’s House, whom she calls her “spiritual father.”

Rev. White’s TV, radio and megachurch ministries have been lucrative. In 2007, the St. Petersburg Times reported that she owned a $2.1 million house in Florida, had a condo in Trump Tower in New York and bought Bishop Jakes a Bentley convertible for his 50th birthday.

According to past interviews, she first met Mr. Trump when the businessman gave her a call after seeing her preach on TV. They became friends.

In the past year, Rev. White has spoken at Trump rallies and helped organize meetings between the candidate and evangelical leaders. She went on CNN last month to talk about his faith. She delivered a closing prayer at the Republican National Convention.

“I can tell you with confidence that I have heard Mr. Trump verbally acknowledge his faith in Jesus Christ for the forgiveness of his sins through prayer, and I absolutely believe he is a Christian who is growing like the rest of us,” Rev. White told The Christian Post in July.

Rev. White, who speaks in tongues as part of the Pentecostal practice of praying in a language they do not know, understand or control, is not universally popular among evangelicals. The prominent Southern Baptist leader Russell Moore has referred to her as “a charlatan” and “a heretic.”

But Mr. Trump won the election, in part, by capturing 81 percent of the white evangelical vote. It is likely that Rev. White will play some role in the upcoming administration.

Those politics seemed far away at Durham’s End of the Year Breakthrough Revival on Nov. 9. The multiday gathering was organized by D.L. Massey, a Homeland Security Administration employee at the Raleigh-Durham International Airport who pastors a storefront church in Durham.

“I use the funds from these conferences to keep the church alive and to keep it going and to help people in need,” said Pastor Massey.

Asked about Rev. White’s affiliation with Mr. Trump, he sounded confused. “I don’t know anything about that,” he said. “I wish I had.”

“I picked her because she has a ministry to empower people,” Pastor Massey added. “And she crosses the race line.”

The Rev. Mary McKenzie, pastor of Faith Assembly Christian Center, which hosted the event, said she did know about Rev. White’s association with Mr. Trump, but “I don’t think she’s going to be involved in politics. She is going to be ministering unto him,” Rev. McKenzie continued. “She’s just giving him what the Word of God says.”

Rev. McKenzie and her late husband, LeRoy McKenzie III, founded the youth-focused Faith Assembly Christian Center in 1993 after a man fatally shot their nephew and wounded five others who had tried to steal a moped from his property.

Lavette Connelly of Raleigh had never seen Rev. White in person, but she used to watch her TV show. Ms. Connelly said she found Rev. White’s life story inspiring: “If she can make it, then you can make it.”

Ms. Connelly wasn’t familiar with Rev. White’s involvement with the Trump campaign. But she said it wasn’t relevant: “We’re all trying to make it to heaven.”