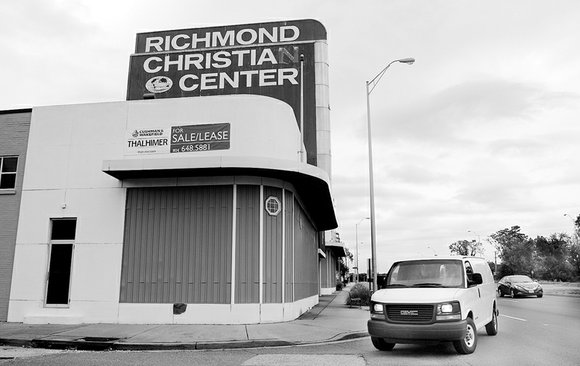 The fight over ownership of the bankrupt Richmond Christian Center in South Side has ended, at least for the time being.

An Eastern Henrico Church, Mountain of Blessings Christian Center (MBCC), led by married co-pastors Dimitri and Nicole Bradley, has dropped its suit asking the U.S. Bankruptcy Court to allow MBCC to proceed in purchasing the RCC’s property in the 200 block of Cowardin Avenue.

In a new filing earlier this month, MBCC attorney W.R. Baldwin III now wants the court to allow his client to withdraw its purchase offer and be refunded the $196,000 deposit MBCC put up for the proposed purchase, which has been on hold for five months.

MBCC’s decision to pull out gives the RCC’s congregation more breathing room to try to get the church’s finances in order and eventually leave bankruptcy.

The ownership of RCC has been a question mark for more than 18 months. The church, then led by founder Stephen A. Parson Sr., filed for bankruptcy in November 2013 to gain court protection and to ward off foreclosure by a lender claiming default.

A year later, the court ordered RCC’s property auctioned after the church was unable to gain new financing to pay off the lender, who was owed more than $2 million.

But the sale never went anywhere.

MBCC’s prospects to buy the complex declined further after the court appointed a trustee, Bruce H. Matson, to oversee the RCC property and finances.

Mr. Matson, instead of fulfilling MBCC’s hopes of moving ahead with the sale, told the court that the RCC congregation was committed to the church and had a real prospect for regaining fiscal solvency.

After the congregation removed Mr. Parson from the governing board and the pulpit and stopped his salary, Mr. Matson rejected the sale and laid out a plan to the court that could enable RCC to leave bankruptcy later this year. That plan included going after Mr. Parson and his son to recover RCC resources that Mr. Matson alleges the Parsons improperly took from the church.

If that plan does not work out, the court could again order the sale of the RCC property.

In early April, a disappointed MBCC filed suit seeking to force the sale that had been approved.

A month later, MBCC withdrew that suit and submitted its current filing seeking the return of its deposit.

The deposit is being held by Motley’s Auction, the company that conducted the sale of the RCC property in 2014 and has been waiting for the bankruptcy court’s direction on how to proceed.