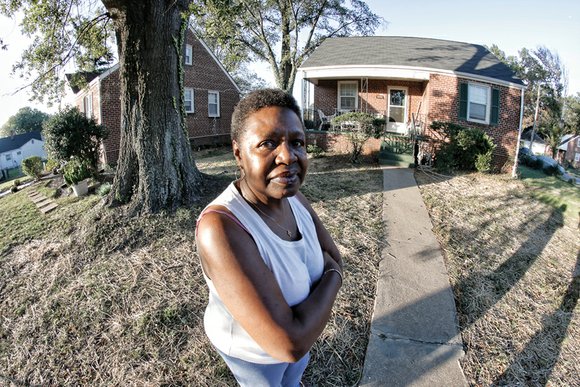 Charlene C. Harris stands in front of her two-bedroom home in the West End. She has been told to buy it or face having to move. Location: 1600 Colorado Ave. Photo by Sandra Sellars

Charlene C. Harris hoped to live out her years at 1600 Colorado Ave., the single-family brick cottage that she and her family have called home for 47 years.

But now the retired 68-year-old state employee is being told she must either purchase the two-bedroom home from her landlord, the Richmond Redevelopment and Housing Authority, or face moving.

“It’s a terrible situation,” she said. “RRHA has told me I have to put up $500 to begin the process and to get a mortgage by December. Otherwise, I would have to accept relocation.”

Like other public housing tenants of such homes, she feels caught in a Catch-22. Until she puts up the $500, RRHA won’t provide an appraisal that would let her know what the sales price would be so she could figure out if she could afford the house on her fixed income of about $1,500 a month.

It is an ironic twist that RRHA is now marking its 75th year of operating public housing by reviving a plan to cut its inventory of units.

The goal: To get rid of the remaining 110 single-family housing units that once ranked among RRHA’s premier places to live.

Many of the houses, like the one Ms. Harris occupies in the Randolph area, are among dozens that RRHA bought and moved out of the construction path of the Downtown Expressway in 1968. Others were purchased in various neighborhoods until 1977.

Overall, the experiment created RRHA’s first mixed-income neighborhoods, with public housing residents living side-by-side with people of higher incomes — the goal of every development with which RRHA is now involved.

“It may have been a good idea at the time,” said T.K. Somanath, interim RRHA executive director. But today, with Congress shrinking maintenance dollars for public housing, “keeping them up is cost prohibitive. We just don’t have the money.”

According to RRHA, the federal funding it receives for maintenance of its properties has dropped from around $7.7 million a year to below $5.7 million annually.

The authority previously estimated that its inventory of single-family units would need about $1.1 million in maintenance a year, but that it would have only $260,000 a year to put toward that purpose.

Many of the homes still lack modern central heating and air conditioning systems and have outdated electrical boxes and plumbing that needs replacement. Even so, city tax assessment records indicate many are valued around $100,000.

RRHA has long considered the aging houses a liability, particularly with the rents fixed and the cost of repairs going up.

Nine years ago, RRHA planned to spend $8.5 million to modernize the houses and then sell them to tenants, but that effort never materialized.

In 2007, RRHA received permission from the U.S. Department of Housing and Urban Development to sell the houses “as is” at fair market value to the tenants. But the Great Recession then collapsed the mortgage market and RRHA’s plans to renovate the properties to improve their condition.

The goal then and now was to shift the onus for maintenance to new owners, whether the tenants or others who purchase the houses.