Show them the money 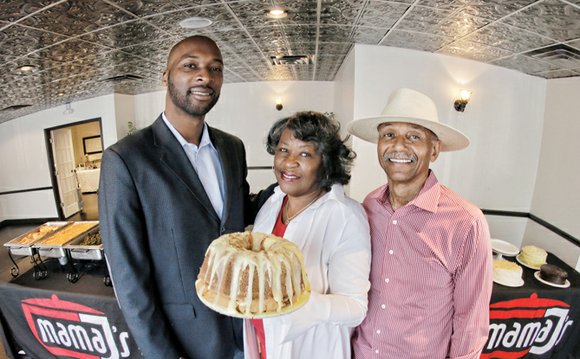 Lester Johnson, co-owner of Mama J’s Kitchen in Downtown, set the wheels in motion last year to try to earn a piece of the economic pie that the 2015 UCI Road World Championships is expected to generate when cyclists from across the world roll into town this weekend.

“We really wanted to be a part of it,” Mr. Johnson told the Free Press this week.

The bid was approved and Mama J’s made 1,800 box lunches for volunteers who worked at the college championships from May 2 through 4.

The strategy was simple: Mr. Johnson wanted to work with officials with Richmond 2015 early because they would be selecting vendors for the bigger, nine-day UCI Road World Championships in Richmond Sept. 19 through 27.

“We wanted to get in front of the people we knew would be making decisions for the UCI bike races,” he said.

Fast forward to this weekend. Mama J’s is contracted by Richmond 2015 to serve 2,700 meals to about 900 people who will watch the final three days of the races Friday, Sept. 25, through Sunday, Sept. 27, from a VIP tent on Libby Hill in the East End.

Mama J’s is one of at least six black-owned businesses performing work for the UCI Road World Championships, the Free Press has learned.

Owners of the six businesses declined to say how much they are being paid by Richmond 2015.

Richmond 2015 and city officials have estimated the bike races will generate about $135 million in economic impact in the Richmond area and another $23 million to $30 million across the state.

Black-owned businesses, long neglected by city and state officials in procurement efforts, had hoped to see more inclusion for the bike races.

Tammy D. Hawley, a spokesperson for Richmond Mayor Dwight C. Jones, said he had asked Richmond 2015 to develop a minority business plan for the bike races, and they “adopted” an inclusion rate of 25 percent or more for women- and minority-owned businesses.

She referred the Free Press to Richmond 2015 officials to find out how much they have spent with black-owned businesses for the UCI races.

In response to several Free Press queries, Richmond 2015 spokesperson Paul Shanks declined to say how much the nonprofit will spend with black-owned businesses.

He also declined to give the total number of vendors involved in the multimillion-dollar venture and what they expect to be paid.

“Richmond 2015 has always been committed to engaging the many excellent businesses that call our region home,” he stated in a Sept. 3 email. “However, our policy prevents us from sharing any contractual details of vendor relationships.”

He added: “To date, more than 50 percent of the organization’s total discretionary spending has been with SWaM certified companies, including many businesses that are African-American owned.” SWaM stands for small, women and minority-owned businesses.

Monica Smith-Callahan, community engagement director for Richmond 2015, said the group held a vendor symposium in February at Richmond International Raceway and worked closely with the city’s Office of Minority Business Development to “get the word out to African-American vendors, to learn what our needs are and what vendors we’re looking to hire.”

Officials from the Office of Minority Business Development did not respond to Free Press queries about those efforts.

Sam Young, president of Astyra in Downtown, said his company envisions providing about 100 workers during the races. He said they would construct and break down any structures related to the races. He said some workers would serve as drivers and course marshals and others would staff retail locations selling memorabilia.

“I think it’s great,” Mr. Young said of being involved in the races. “We are definitely going to make the most of it.”

Sharon Dabney-Wooldridge, owner of Kleane Kare on South Side, said seven to 10 employees would perform housekeeping daily at the Greater Richmond Convention Center in Downtown.

Ken Johnson, owner of Johnson Inc., said his company “is providing marketing related services and stakeholder outreach” for the UCI races and had developed a video, “Time to Ride 2015,” to promote the races.

West Cary Group developed the Navigate.Richmond2015.com website as a “guide for race participants, residents and tourists to explore multiple aspects of the elite event.”

The site includes information on course routes, street closures, transportation and parking options, according to a press release from West Cary Group.

“It was important for us to collaborate with Richmond 2015 and the City of Richmond in order to create a site that demonstrates how prepared we are for the global stage,” stated Moses Foster, president and CEO of the company.

Ty’s Hauling and Paving has been busy hauling and laying concrete across the city in preparation for the races.