VSU coach looking to move from interim to permanent 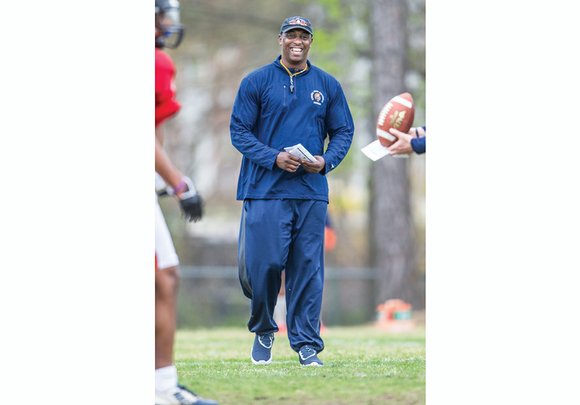 As an athlete, Justin Harper was best known for his ability to catch a football.

It was a skill that carried him all the way to the NFL.

Currently, he’s looking to haul in something else — a head coach position.

In a bit of an awkward situation, Coach Harper is conducting spring drills at VSU, hopeful of having the “interim” tag removed by the start of the 2016-17 season.

“God opens doors. This is a great opportunity for me,” said Coach Harper. “I’d love to be the head coach. If it doesn’t happen, I’ll be happy to stay on as an assistant.”

Her response to a Free Press query about the coaching situation:

“Thank you for contacting me. VSU is currently going through the process of hiring a head football coach. Once the decision is made a formal announcement will be made.”

Spring drills concluded with the Blue-Orange Game last Saturday at Rogers Stadium on the Ettrick campus.

After that? It’s the high-dollar question around Ettrick.

The 6-foot-3 Coach Harper hails from Catawba, N.C., where he spurred Bandys High School to a North Carolina state title.

He went on to star at Virginia Tech, catching 83 passes for 1,338 yards and nine touchdowns and helping the Hokies to the 2007 Athletic Coast Conference crown.

He later snagged passes in the Canadian Football League with Saskatchewan and British Columbia before getting his first coaching gig as an aide at Lenoir-Rhyne University in Hickory, N.C., near his hometown of Catawba.

Coincidentally, VSU opens the 2016-17 football season at Lenoir-Rhyne on Sept. 3.

Coach Harper came aboard at VSU in January 2015 as Coach Thweatt’s receivers coach. His pupils included Jaivon Smallwood, one of the top receivers in VSU annals. Overall, Trojans receivers made 118 catches last season for 1,684 yards and 10 touchdowns. Quarterback Tarian Ayres will return in the fall as a third-year starter.

“We got pretty much all the kids we were after — and then some,” he said.

Also, the nucleus of the coaching staff remains solid, with the exception of Jeff Hanson, who also left for JMU.

While the hiring decision will be left up to the VSU administration, Trojans players have given the thumbs-up to the current group of whistle tooters.

Asked if he wanted Coach Harper to be named permanent head coach, record-setting tailback Trenton Cannon quickly responded, “All of us do.”