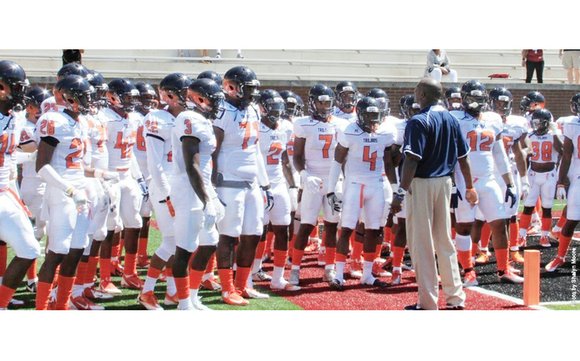 So far so good.

After just one game, Virginia State University football Coach Reggie Barlow has earned a Gatorade shower, a game ball and, best of all, a resounding road victory.

The Trojans are favored in this Saturday’s home opener against Tusculum College, a program VSU routed last year 40-13 in East Tennessee.

Upending a formidable opponent such as Lenoir-Rhyne University on foreign turf provides much momentum for the home opener.

“Today was a great way to start our season against a very good team,” said Coach Barlow. “The guys came out with the type of energy and enthusiasm we want. It was a blessing.”

Lenoir-Rhyne was the NCAA Division II runner-up in 2013 and the South Atlantic Conference champ from 2011 through 2014.

Tusculum College, also of the South Atlantic Conference, comes to VSU with a 0-1 record following a 13-10 loss last week to the University of Virginia-Wise.

Coach Barlow’s first game on the Trojans’ sidelines couldn’t have gone much smoother.

Then there was celebration. 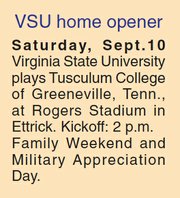 In the seconds following the victory, the Trojans drenched their coach with Gatorade in good fun.

Cannon carried 15 times for 66 yards and a touchdown, while adding 72 yards and another touchdown on pass receptions.

Bryant Frazier, from Meadowbrook High School, had 2½ of the team’s four quarterback sacks, and Bryce Bradley, from Varina High School, returned a fumble recovery for 44 yards.